In this following guide, we will give you some overview of Wu Zetian skills, talent tree, and strategy in Rise of Kingdoms. Hopefully, this guide will help new players how to use Wu Zetian and how to maximize her strength in the game.

Wu Zetian is a legendary Commander from China that is only available for kingdoms over 140 days old. She is also obtained in Lost Kingdom Season 2. Since her set of skills is mainly focus on boosting stats while defending your city, she is considered the best garrison Commander in the game, no doubt about that.

To summon Wu Zetian, you will need 10 of Wu Zetian sculptures, which can obtain throughout events, the VIP shop, golden chests.

This ability deals a damage factor of 1000 toward a single target and also help Wu Zetian to heal her troops, which is quite useful to reduce the wounded troop when Wu Zetian serves as garrison Commander.

Lion Heart gives Wu Zetian’s troop 10% more attack damage and extra 10% towards rallied armies. In total, Wu Zetian gains 20% bonus damage against rallied armies, which is a decent bonus since rallied armies are usually very strong and can deal a huge amount of damage so you want to deal as much damage as you can.

This is a very nice passive skill that can reduce the damage taken from the enemies and make the troops are a little bit tankier in the battle. And they also have a small chance to silence the enemy for 2 seconds, which can be troublesome for enemy nukers.

This is a very powerful passive skill that can help Wu Zetian and her troops last longer when she is defending your city.

Brightest Sky is the passive skill that will help Wu Zetian to improve her fighting capabilities. Her troops’ counterattack damage gains 20%, her troops also have a small chance to deal 500 damage to the attacker with normal attacks, which is very useful because it increases the overall output damage of Wu Zetian.

Wu Zetian is the most effective garrison Commander in the game that can help you to defense your city. These following build will make the attacker regret when they decide to attack your city. 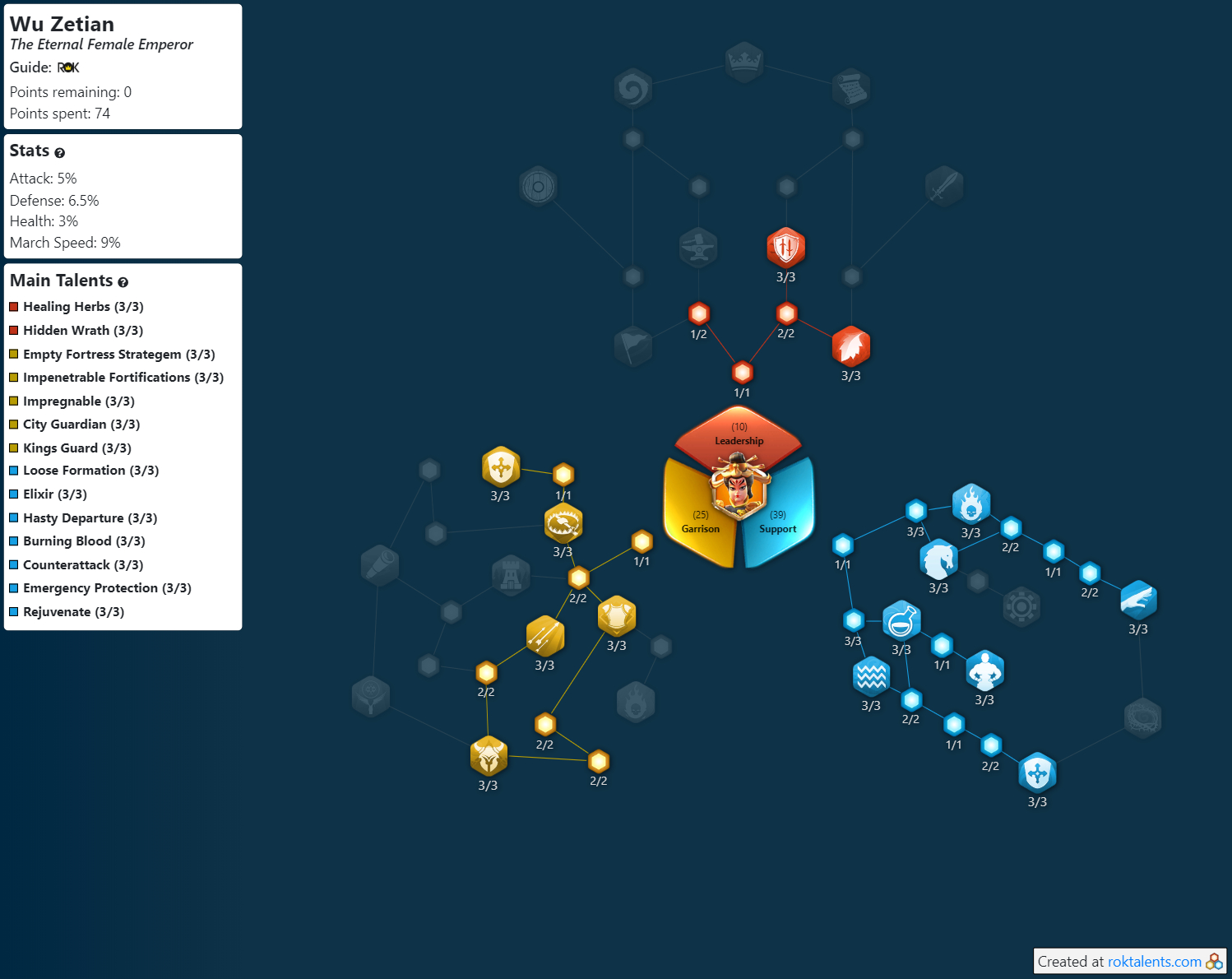 This is a standard garrison build. We invest in some very good nodes like Kings Guard and City Guardian in the Garrison branch. These nodes will help Wu Zetian improve her troops’ health and attack damage. We also want to improve her rage regeneration by taking Burning Blood and Hidden Wrath nodes. Since it is more of defensive build, nodes like Emergency Protection, Elixir, and Healing Herbs are very good to take. 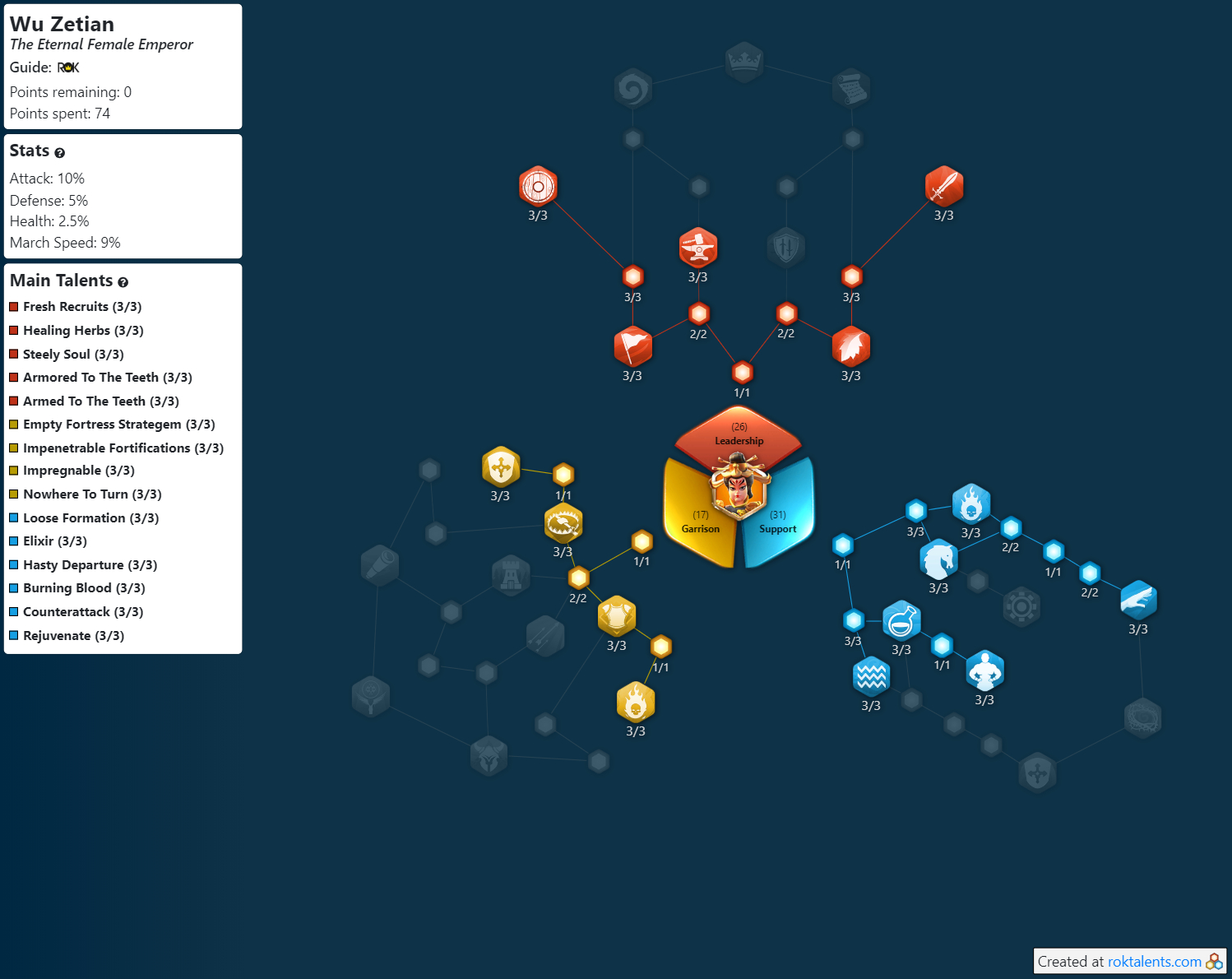 If you want a more offensive build, you can use this above build:

Constantine I should be the primary Commander.

Charles Martel: Charles can put up a shield that can absorb a huge amount of damage. In addition, the infantry units gain 20% more health and defense is a very good bonus. The 30% more counterattack damage will bring even more damage to Wu Zetian’s already strong countering strength. Charles Martel gives 10% more damage to watchtower that make this pair is a very powerful defensive force.

Charles Martel should be the primary Commander.

You can use Eulji Mundeok or Sun Tzu as an acceptable replacement if you don’t have Charles Martel yet.

Yi Seong-Gye should be the primary Commander.