The following guide will give you an overview of Trajan’s skills, talent tree, and strategy in Rise of Kingdoms. Hopefully, this guide will help players know more about him and how to maximize his strength in the game.

Trajan is a brand-new Legendary Commander that is going to be released soon in Rise of Kingdoms. His abilities show that he can be a very powerful Commander for open-field battles.

Trajan’s Column is an excellent active skill. Although it doesn’t deal much damage, it comes with the strong skill damage and rage bonus toward his troops and nearby friendly troops. Not to mention the debuff that makes the target receive 25% more damage. This skill will be very effective when pairing him with a strong nuker or fighting against the enemy with your allies.

This passive skill gives Trajan’s troops 20% more defense at max level. It also increases their health by 20% when they are not in the Alliance territory which is quite useful for him to join the open-field battles.

Great Expeditions is a great passive skill since it can utilize the use of mixed troops by increasing the troop’s capacity by 10%. The passive skill also gives them the ability to deal 300 more damage and makes the enemy receive 20% more damage for 4 seconds whenever Trajan uses his active skill.

It is a very useful skill for a long fight since it can increase the defense of Trajan’s troops by 60%. 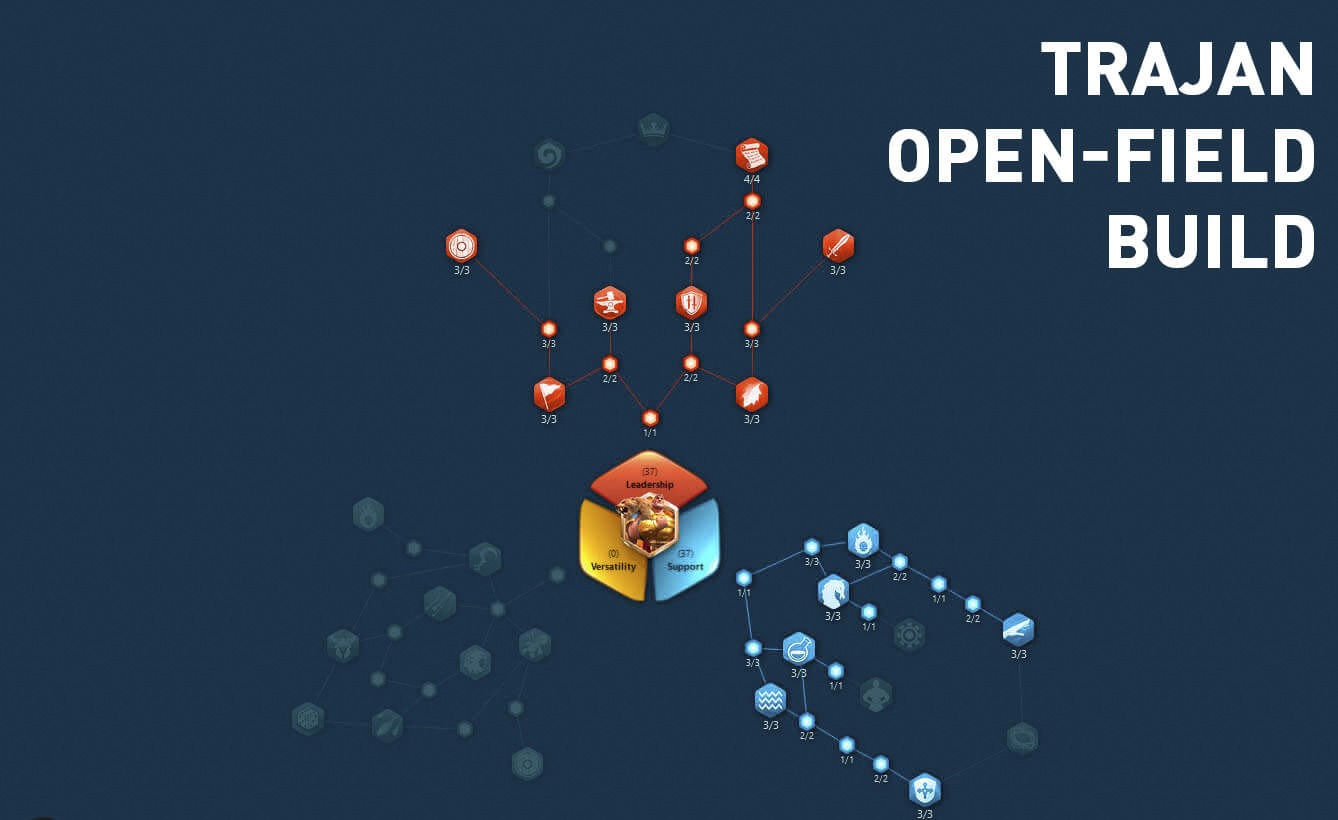 This is definitely the best talent tree build for Trajan since it focuses on improving his fighting capability on the battlefield. The best role for him is a secondary Commander since he doesn’t have many powerful offensive skills. However, his ability in supporting is quite exceptional when it comes to open-field battles.

Alexander is one of the best open-field Commanders in the game. His strong resistance and constant improvisation make him a great leader. Together Alexander and Trajan can be an undefeatable force on the battlefield.

He is a powerful infantry Commander who has lots of solid defense and buff toward his troops. He also has the largest healing skill in the game although the cooldown is quite long. Constantine I may not as strong as Alexander but he is still a great partner for Trajan.

He is a strong conqueror that can command many types of units. Not to mention the bonus troops’ capacity and the ability to fight outside of Alliance territory that they both have. Together they can be a fearful force in the battle.