In this following guide, we will give you some overview of Takeda Shingen’s skills, talent tree, and strategy in Rise of Kingdoms. Hopefully, this guide will help new players how to use Takeda Shingen and how to maximize his strength in the game.

Takeda Shingen is a legendary Japanese Commander. He is one of the strongest Commander in the game because he has the abilities to increase his defense, heal himself and reduce the enemy strength in the combat at the same time.

To summon Takeda Shingen, you will need 10 of his sculptures, which can obtain throughout events, the VIP shop, and golden chests.

This is a powerful debuff that can make the enemy to take 50% more damage from normal attacks at max level. It is even more effective if your troop can deal a huge amount of normal attack. This active skill has 4 seconds duration, and it can trigger once every 2 seconds, so it means that you can use his active skill twice every time.

This passive skill gives huge bonus damage to cavalry units’ attack of 40%. They will grant a 10% chance to increase 30% more march speed for 3 seconds which is very good if you want to chase your enemies.

This is an excellent defensive skill that will certainly increase the survival of Takeda’s troops in the battle.

Another amazing defensive skill from Takeda that can reduce the skill damage taken by 5%. If Takeda gets hit by the enemy, there is a 10% chance that he will receive 25% less damage from both normal attack and counter-attack. It is a very good skill when it comes to fighting with strong nukers.

Combining with Takeda’s active skill, this passive ability will give him an extra bonus damage up to 80%. It means that your troops will deal 1.8 bonus damage which is a very nice boost.

We think the best build for Takeda Shingen is PvP build since he has lots of good defensive skill as well as an excellent active skill. This build will definitely turn him to a beast in the battle because it helps him with the rage regeneration, increases his overall damage and of course, we also invest points in some defensive nodes that make him even more tankier. 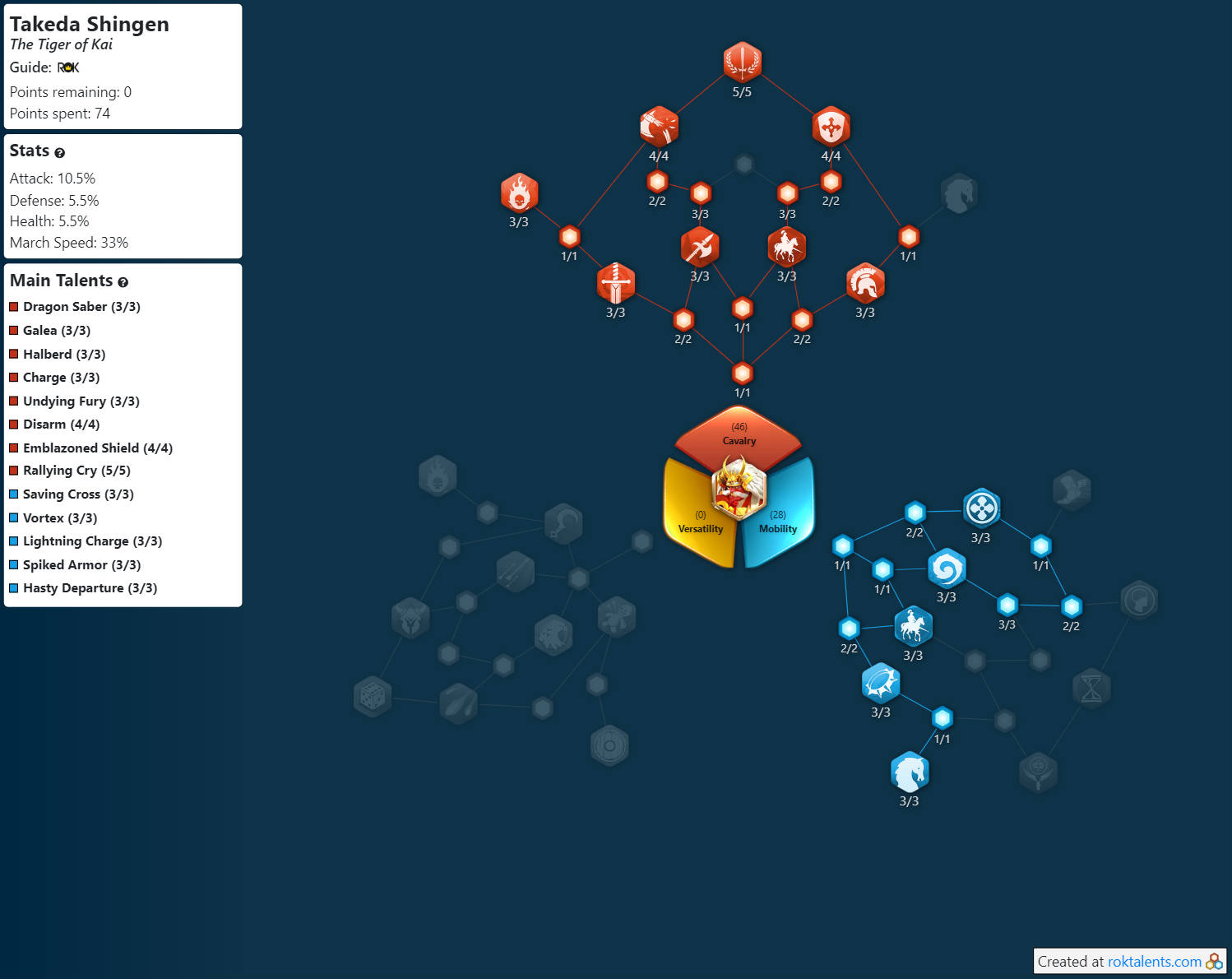 Attila has a set of skills that can increase normal attack by 30%. Since he is a Commander who is specialized in the cavalry, cavalry units also get a 40% additional attack bonus. These buffs will benefit a lot to Takeda Shingen because it significantly increases the overall damage. After Takeda uses his active skill, the total amount of bonus damage goes up to 380% – which makes them a very deadly pair in the battle.

An excellent choice since Genghis Khan can deal a lot of damage with his active skill, and even more with the buffs from Takeda.

Takeda should be the secondary Commander in this combination.

You can use Saladin if you don’t have Genghis Khan.