In this following guide, we will give you some overview of Sun Tzu’s skills, talent tree, and strategy in Rise of Kingdoms. Hopefully, this guide will help new players how to use Sun Tzu and how to maximize his strength in the game.

Sun Tzu is a starting epic Commander who comes from China’s nation. He is one of the best epic nuker Commander in the game because of the fast rage regeneration that lets him frequently release the splash damage toward the enemy. He heavily specializes in the infantry since his abilities focus on improving the infantry’s health and damage reduction.

To summon Sun Tzu, you will need 10 of his sculptures, which can obtain throughout events, the VIP shop, golden chests.

Art of War is the active skill that you definitely want to max first. At max level, this skill can deal 450 damage to 3 targets and 600 damage in the next turn. This active skill also helps Sun Tzu restores 50 rage for each enemy that hit by its, which lets him be able to use its regularly in the battle.

This passive skill gives Sun Tzu’s troops a 5% more damage reduction when he is playing as a garrison Commander.

Master Strategist is a solid defensive passive skill. It gives Sun Tzu’s infantry units 10% more health and damage reduction, which makes them tankier in the battle. This passive skill works best if you use pure infantry build.

Ever-changing Tactics is an excellent passive skill. It increases the active skill’s damage by 20% at max level. It means that, whenever Sun Tzu uses Art of War, it deals 540 damage in the 1st turn and 720 damage in the next turn. It certainly a considerable amount of damage for an epic Commander that lets him easily take enemies down.

This extraordinarily enhanced skill makes Sun Tzu even stronger when dealing with multiple enemies. With the help of the 4th skill, Sun Tzu will deal 960 damage to 5 different targets and 1,200 damage in the following turn, which is 6,000 damage in total. This enormous amount of damage will help Sun Tzu dominate the enemy on the battlefield. 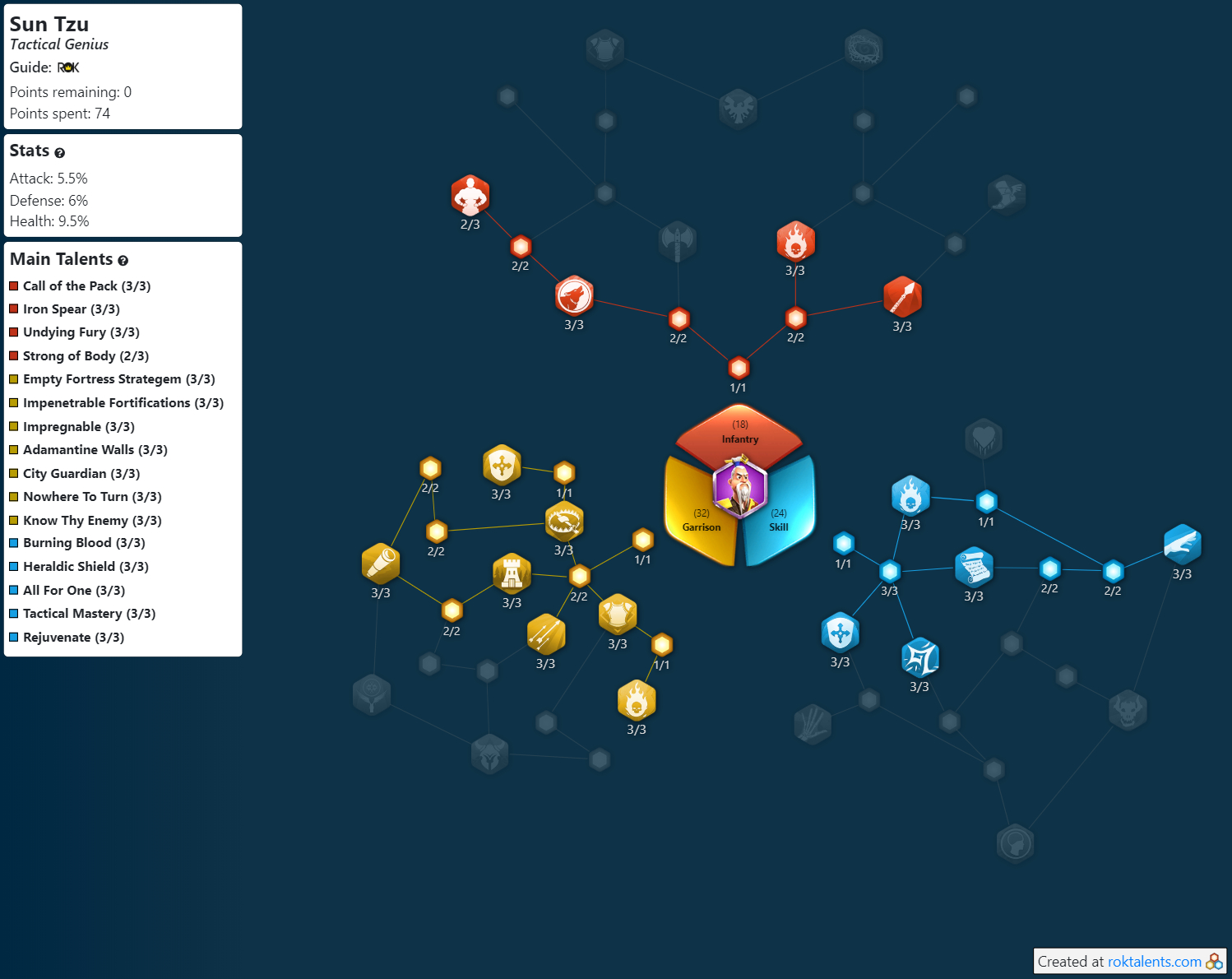 This is the best build for the garrison. It accelerates the speed of rage restoration that lets Sun Tzu frequently use his active skill. It also improves his troops’ health, defense, and attack when Sun Tzu is serving as a garrison Commander. 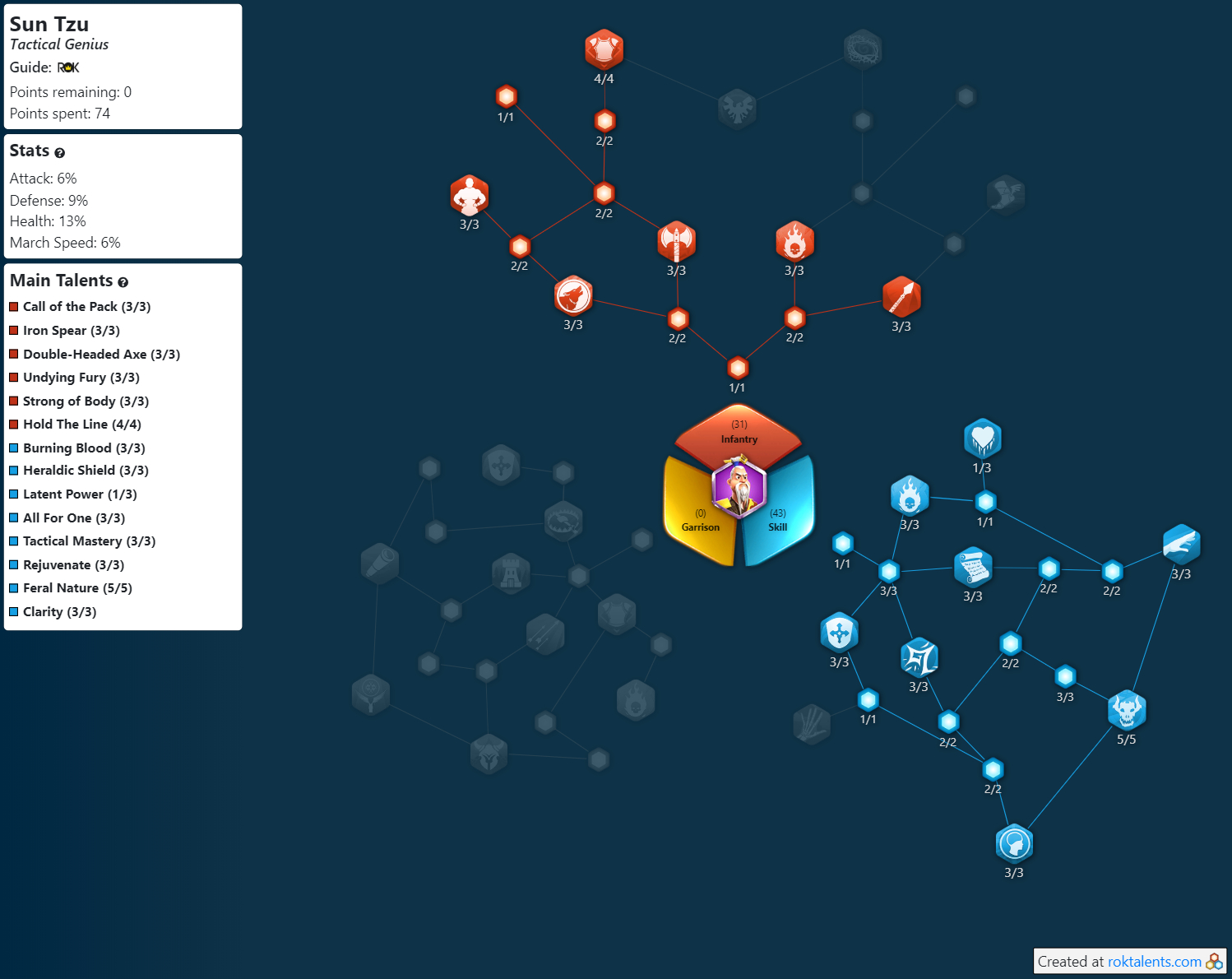 Since his active skill can hit multiple enemies at the same time, he is suitable for PvP. Just like the Garrison Talent Build, this build also focuses on improving the rage regeneration, his troops’ health, march speed, and attack. This build works best when you are rolling the pure infantry build.

Eulji Mundeok: Since they both specialize in the infantry, their abilities can give what other needs, such as health, attack, and defense. Especially that Eulji Mundeok can reduce the target’s defense, which makes them more vulnerable to Sun Tzu’s attack. Besides, whenever the enemy attacks their troops, they will have a small chance to increase their attack by 100% in the next turn.

Julius Caesar: Caesar will further improve the attack and defense of Sun Tzu’s troops. He can also reduce the enemy’s combat effectiveness in the battle. Plus, he enlarges the troop capacity, which allows bringing more troops into the battle.