In this following guide, we will give you some overview of Richard I’s skills, talent tree, and strategy in Rise of Kingdoms. Hopefully, this guide will help new players how to use Richard I and how to maximize his strength in the game.

Richard I is considered one of the best defensive Commander in Rise of Kingdoms. He is a legendary Commander who is specialized in the infantry. His defensive skills will surely reduce the damage taken against the heavy nuking Commander. Above all that, he also has an ability that heals his troop. You can say that he is a beast in the battle.

He only becomes available after your Kingdom reaches 120 days old. To summon Richard I, you will need 10 of his sculptures, which can obtain throughout events, the VIP shop, and golden chests.

You will definitely want to max this skill first. At max level, this ability can heal Richard I’s slightly injured troops by 1400. Besides, it can apply the debuff to 5 targets for 2 seconds. The damage and march speed reduction will help you a lot in the battle, especially the reduction of march speed. Since infantry is always slow, you will need to slow down the enemy as well so you can easily target them.

This skill provides Richard I’s troops 15% less damage taken, and it also increases their counter-attack by 10% when Richard I is serving as a garrison Commander.

This is a great ability that will benefit Richard I a lot in the battle. It increases the healing effect by 30%, which enhances his active skill. When he is serving as a garrison Commander, the watchtower will receive less 30% damage from the enemy troops.

A very powerful skill that reduces the damage taken to Richard I’s troops by 5%. It means that when Richard I serves as a garrison Commander, he will have 20% less damage taken in total, which is huge. His infantry units also deal 2% more to cavalry units, and he can slow down the enemy by 50% for 5 seconds in every 10 seconds. Which is benefit a lot because infantry units are slow, and they will either need to increase their march speed or decrease the enemy speed to be able to crush the enemy.

Recommended Talent Builds for Richard I 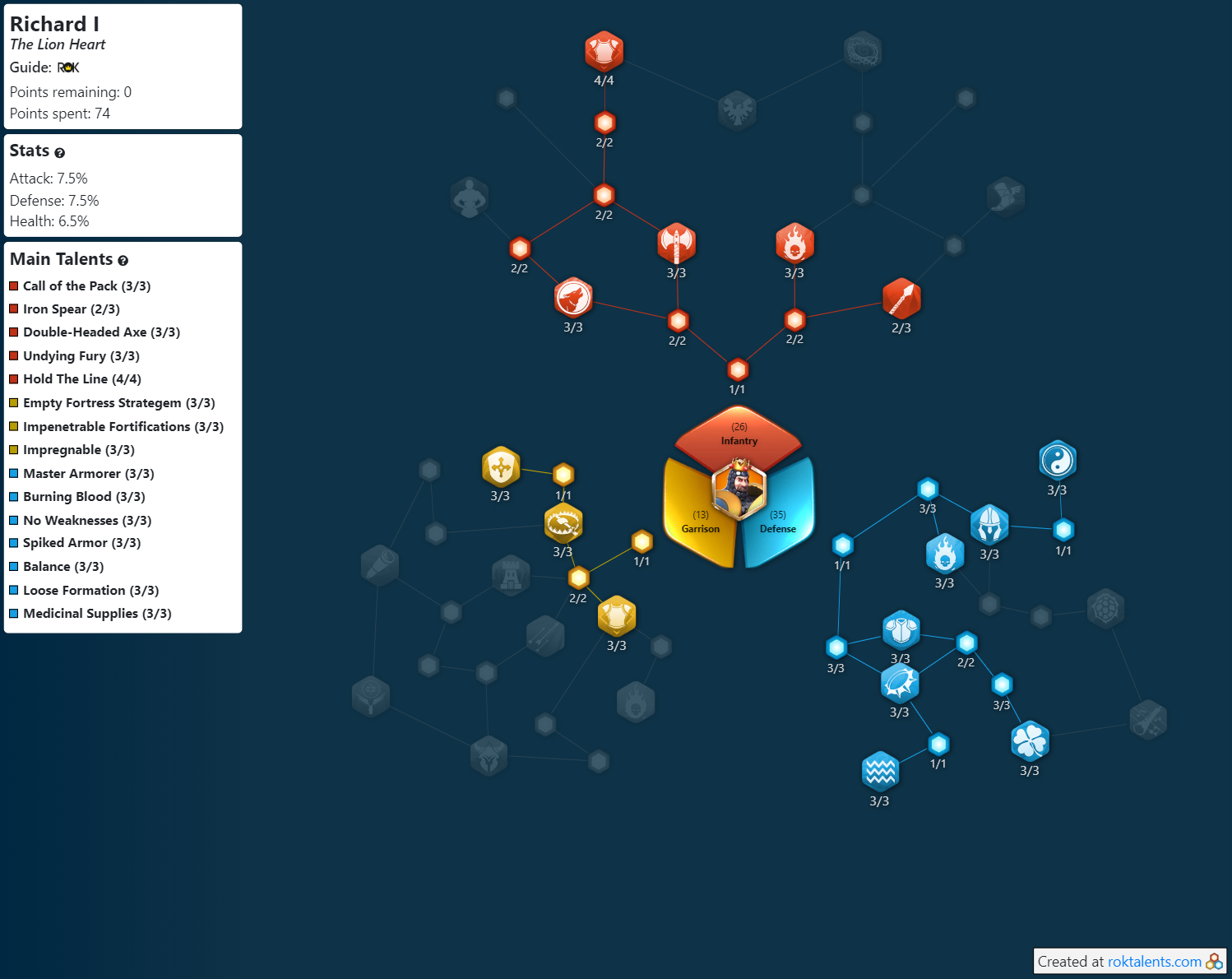 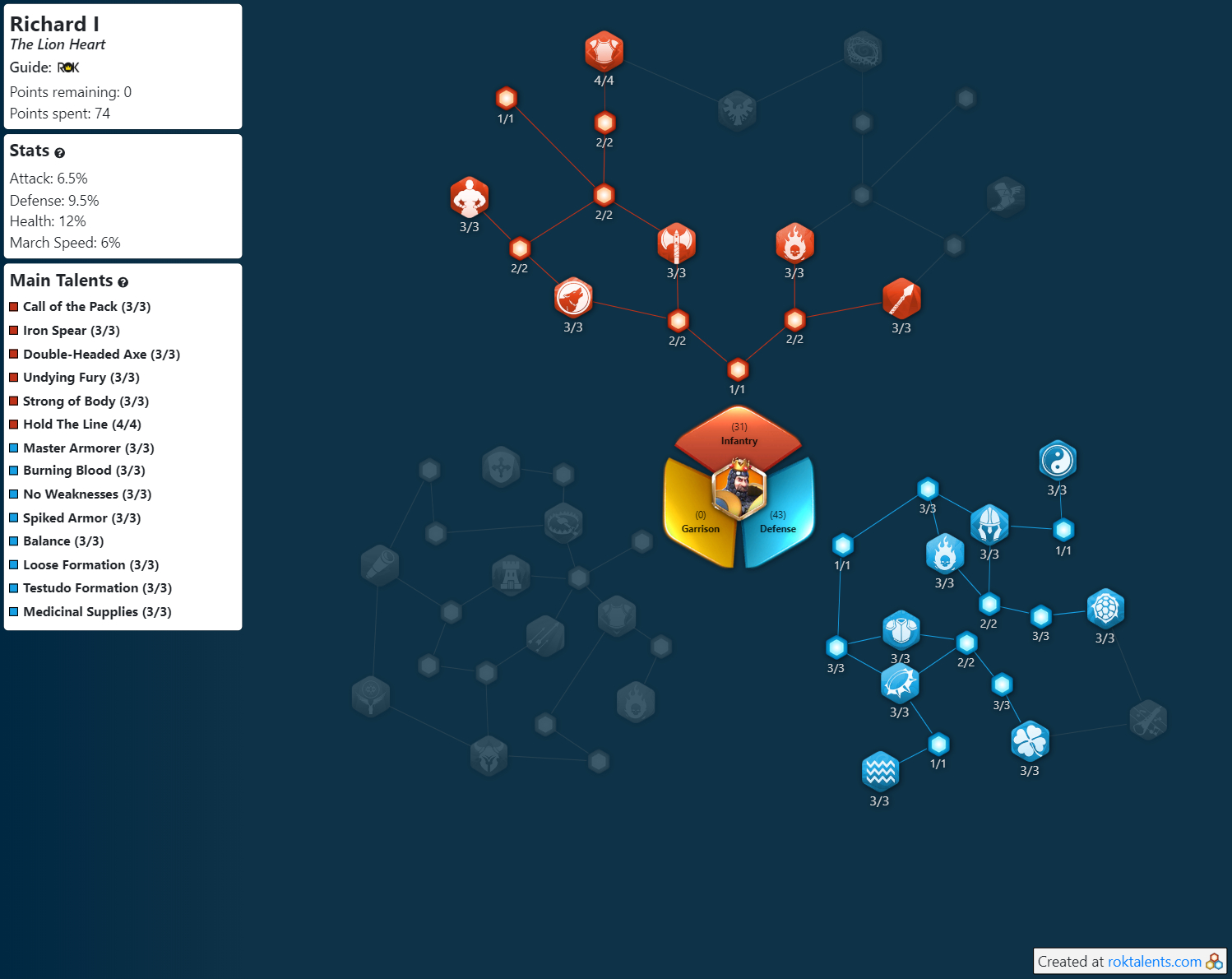 A very solid build for Richard I. You can see that most of the points are invested in improving infantry’s health, defense, march speed, and attack damage. This build also improves Richard I’s rage restoration in the battle.

Alexander the Great is a Commander who specializes in the infantry. He has the ability to create a shield to absorb a certain amount of damage and to increase defense. In addition, Alexander’s active skill gives his nearby allies a small shield to mitigate some of the incoming damage. We can say that Alexander and Richard I can be the best frontline combo in the game.

Richard I should be the secondary Commander.

Charles Martel will further improve the defense of Richard I’s Garrison build because his set of skills is mainly improving the infantry’s health and defense. It also increases watchtower’s defense. So this combination works best if you want to defend your city, Alliance Fortress, or flags.

Richard I should be the primary Commander!

Richard I will surely give some extra defense to strengthen Guan Yu’s troops in the battle.

Since Guan Yu is a very powerful nuker, Richard I should be the secondary Commander.