In this following guide, we will give you some overview of Mehmed II’s skills, talent tree, and strategy in Rise of Kingdoms. Hopefully, this guide will help new players how to use Mehmed II and how to maximize his strength in the game.

Mehmed II is considered one of the best nuker and city conqueror in Rise of Kingdoms. This powerful Commander has a similar active skill like Baibars, but he is much stronger because of his high damage factor, and he can use any kind of troops.

To summon Mehmed II, you will need 10 of his sculptures, which can obtain throughout events, the VIP shop, and golden chests.

This is a very powerful active skill because it can deal damage factor of 1150 to multiple enemies (up to 5 targets). In addition, when he attacks a city, he will get a 700 damage bonus against the garrison and watchtower, which makes him a very strong city conquering Commander and also a solid nuker in the battlefield.

This passive skill will boost Mehmed II’s active skill damage by 20%, which will further improve the insane amount of damage to his 1st skill. It also increases his troops’ attack damage, which allows him to use any kind of troop builds like pure infantry, cavalry, or archer.

Faith is a passive skill that let Mehmed II’s troops have a 10% to deal a bonus damage factor of 1000 to the garrison, which is why he is a very strong city conqueror in this game.

The 10% more troop capacity will let Mehmed II deal more damage to the enemy. Besides, if you launch a rally attack, Mehmed II’s army space will be extended by 10% more. It means that you and your ally members can bring even more destruction to the enemy’s city or troop.

This skill will further increase the danger of Mehmed II in the battle because it dramatically increases his overall active skill damage. The direct damage factor will insanely increase, and there is also a 50% chance to deal additional damage toward garrison and watchtower.

Since his active skill is insanely good, we want to improve his rage regeneration that helps him maintain the active skill up time by taking some good nodes like Hidden Wrath, Burning Blood, and Rejuvenate. We also take nodes that will improve his defense like Strategic Prowess and Buckler Shield. Last but not least, you definitely want to max his Skill branch talent that lets him deal as much damage as possible in the battle. 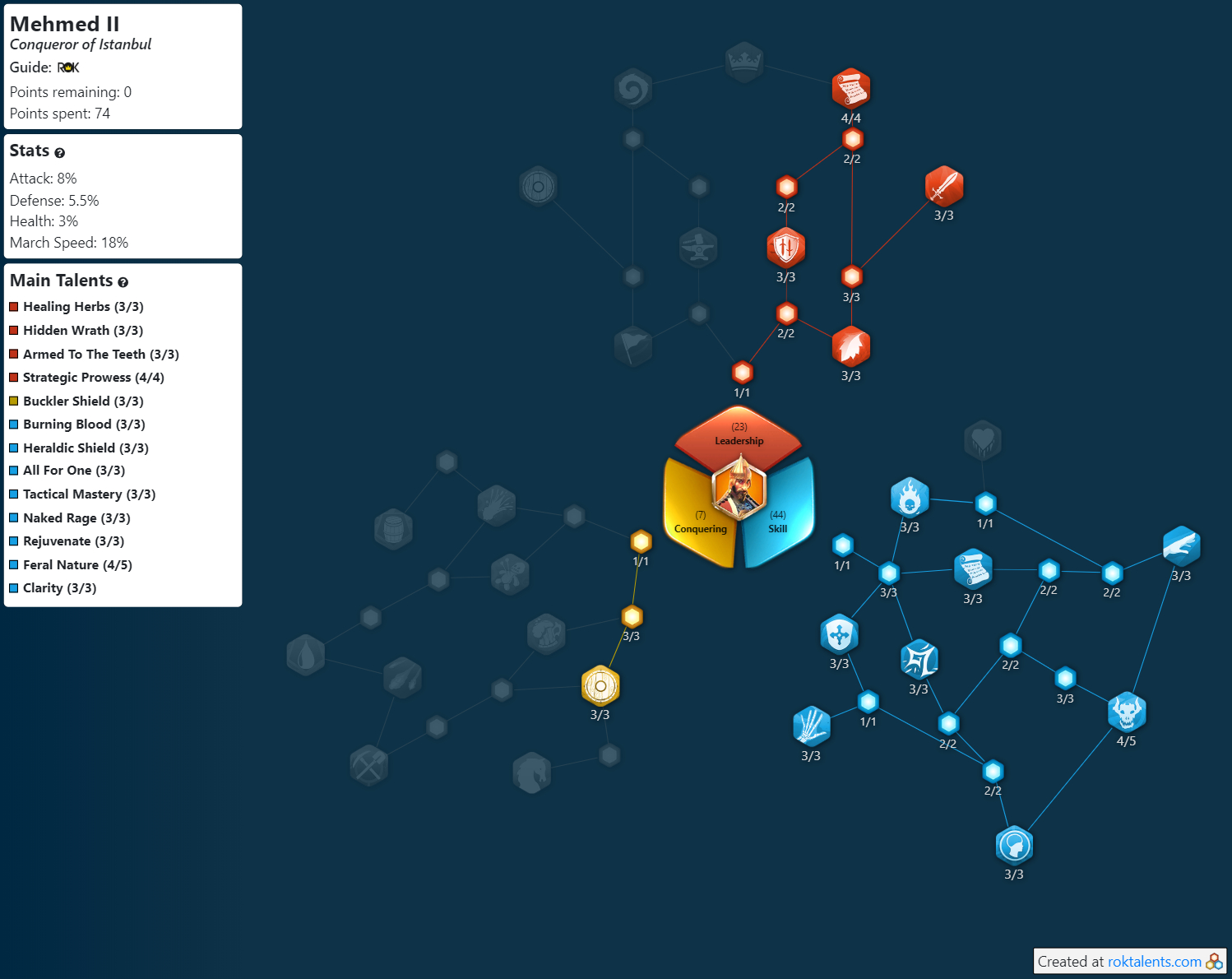 Mehmed II can play any type of units, so there will be lots of Commander that he can play with such as:

Alexander the Great: Alexander the Great will provide Mehmed II’s lack of defense. Together they can combine into one big troop with the increased troop capacity from Mehmed II and one big shield to them and their allies to mitigate some of the damage.

For this combo, you should use the infantry unit only to utilize Alexander’s skill, which gives a bonus attack and healing. And also, Mehmed should serve as the secondary Commander.

Guan Yu: We can say that Guan Yu is the best nuker in the game. With this combo, both Mehmed II and Guan Yu can easily melt down the enemy in the battle. They both have an active skill that can deal damage to multiple enemies, not to mention they do have a bonus attack when attacking the garrison. We can say that this is the combo that you don’t want to skip when attacking the enemy’s city or just simply burst down the enemy in the field.

Mehmed should definitely be the secondary, and you should also use pure infantry unit for this combination.

Yi Seong-Gye: This is a very nice combination. Since Mehmed II is very flexible, he can play with a pure archer build that will benefit Yi Seong-Gye a lot. Yi Seong-Gye has a passive skill that increases 50% more skill damage, which is huge for Mehmed II. They can easily beat multiple enemies in the battle with their skills.

Mehmed should serve as primary Commander.