In this following guide, we will give you some overview of Leonidas I skills, talent tree, and strategy in Rise of Kingdoms. Hopefully, this guide will help new players how to use Leonidas I and how to maximize his strength in the game.

Leonidas I is a legendary Commander who was released at the same time as Guan Yu. He is considered a very powerful Commander who comes with strong offense and defense capabilities. He has a special active skill that increases the overall damage toward enemies who suffer from silence or reducing attack.

Leonidas I is only available when the kingdom reaches 240 days old. To summon him, you will need 10 of his sculptures, which can obtain throughout events, the VIP shop, golden chests.

King of Sparta is a powerful active skill. At max level, it gives troops that under the leadership of Leonidas I 30% more health and let him deal 600 damage toward 3 targets in front of him. One more interesting thing that if those targets are silenced or have their attacks reduced, they will take 50% additional damage. It means that the total damage increases to 900 per target. Therefore, it is the best for Leonidas I is to go with a debuffer.

Three Hundred Spartans is a solid passive skill that gives Leonidas I’s infantry units 30% more health. It also gives him 15% more speed of rage gained, which is very useful since it allows him to maintain his active skill uptime on the battlefield.

It is a very nice defensive skill that can generate a shield, that shield can absorb 800 damage, and it lasts for 3 seconds. During that time, his troops’ attack is increased by 15%.

Son of the Lion is a mighty passive skill that increases the overall damage of Leonidas I by 10%. Since it can stack up to 4 times, the amount of bonus damage can go up to 40%, which is enormous. This effect lasts for 5 seconds.

Battle of Thermopylae is a very powerful passive skill that increases the damage of his troops toward the enemy by 400% when their strength falls below 10%. It lets Leonidas and his army bring as much loss to the enemy as they can in a losing battle or to a close victory. This passive skill also increases the damage reduction by 50%, let his army to survive a little longer on the battlefield. This interesting effect lasts for 10 seconds, and it can be triggered once every hour after leaving the city.

Recommended Talent Builds for Leonidas I

This talent build will suit Leonidas I the most since all of his skills are suitable for PvP. It focuses on increasing the defense, march speed, and health of his units. In addition, it also improves the rage regeneration, which lets him and his partner use their active skill more frequently. 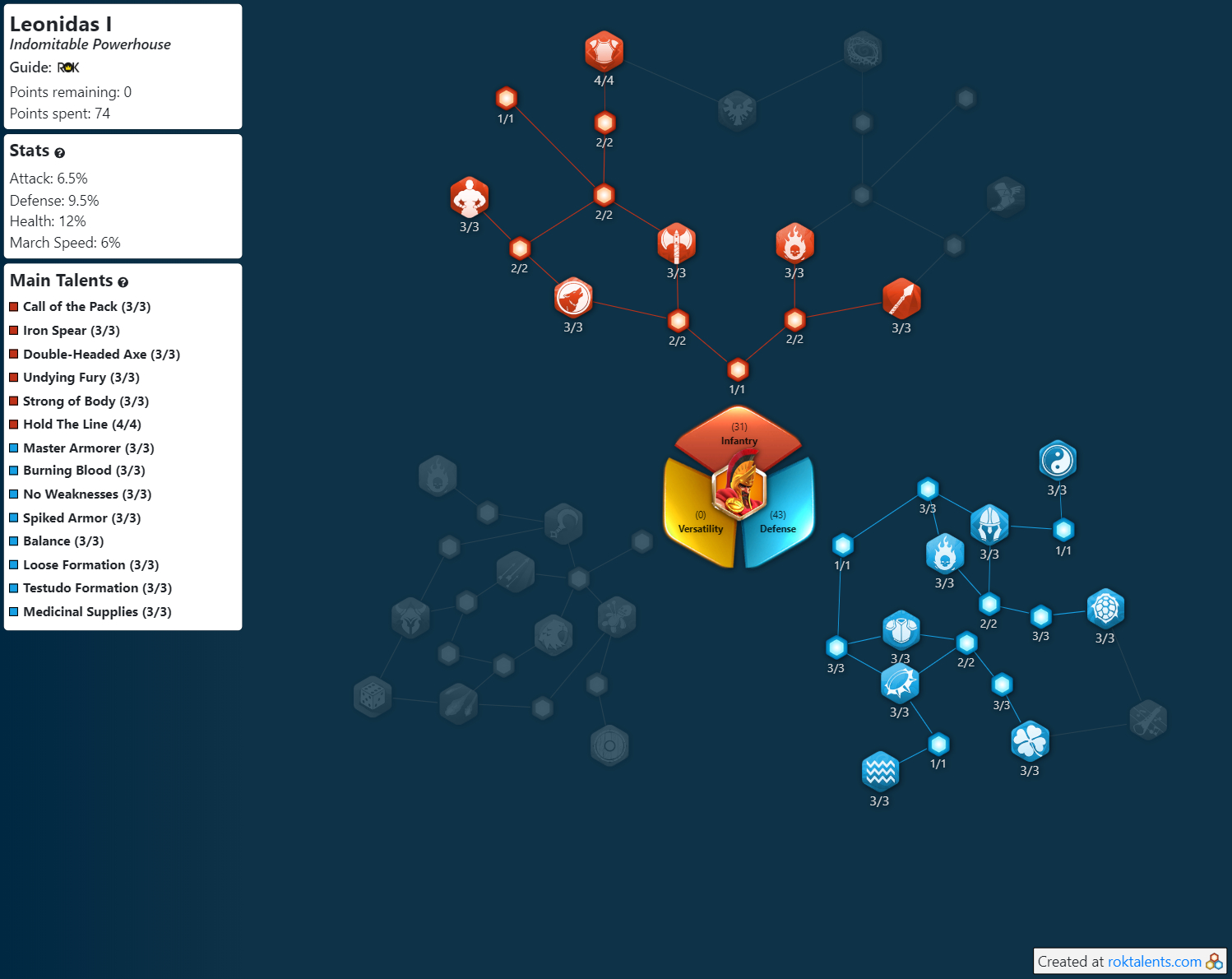 Recommended Pairing Commander for Leonidas I

Guan Yu: No doubt that Guan Yu is one of the strongest damage dealers in the game, and he is a perfect match for Leonidas I. That is mostly because Guan Yu has an active skill that can silence 3 targets as well as dealing a huge blow to them. This silence will help Leonidas and him deal 50% more damage toward their enemies. This is a perfect and deadly combination that many players don’t want to face them in the battle.

Alexander the Great: Alexander is the strongest defensive Commander in the game. He can provide the shield to protect him and his partner as well as dealing tons of damage to the enemy. Together, Leonidas and Alexander can hardly be beaten on the battlefield.

Alexander should be the secondary Commander.