In this following guide, we will give you some overview of Kusunoki Masashige’s skills, talent tree, and strategy in Rise of Kingdoms. Hopefully, this guide will help new players how to use Kusunoki Masashige and how to maximize his strength in the game.

Kusunoki Masashige is the starting Commander who comes from Japan. He excels at controlling the archer units since the majority of his skills improve the archer’s defense and attack. He also capable of dealing with multiple enemies and debuffs since his active skill can remove all of the adverse effects of his troops as well as attacking them at the same time.

To summon Kusunoki Masashige, you will need 10 of his sculptures, which can obtain throughout events, the VIP shop, golden chests.

Shichisei Hōkoku is a quite good active skill since it can neutralize any negative effects such as defense/attack/march speed reduction, increased damage taken, and any sorts of damage over time. The primary source of damage is quite low, but he can still deal a massive blow to the enemy thanks to the 500 additional damage in 2 seconds. You should max out this skill as soon as possible.

This passive skill is only useful when Kusunoki Masashige plays as a garrison Commander. When he does, the garrison’s counterattack increases by 7%.

At max level, Bravery and Wisdom gives Kusunoki Masashige’s archer units 10% more attack and defense, which increases their average damage and their survival on the battlefield. This passives skill works best when running pure archer build.

Tragedy’s End is an extraordinary passive skill that gives Kusunoki Masashige a small chance to strike the enemy with 900 damage in 2 seconds. It considerably increases his average amount of damage.

This passive skill enhances the Bravery and Wisdom by rising 5% more archer’s defense and attack value. 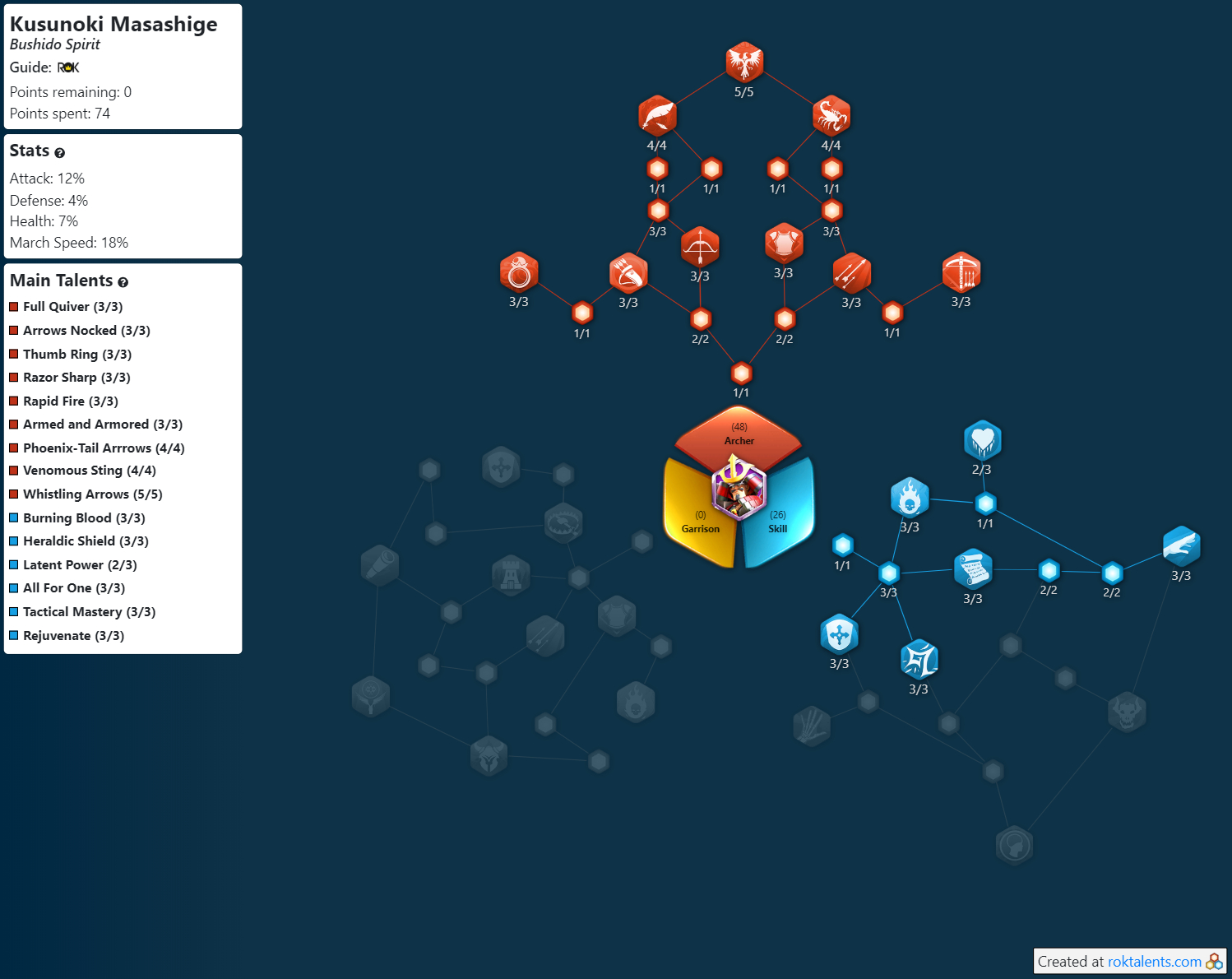 This talent build will help Kusunoki Masashige become a more powerful nuker in PvP. The majority of this talent build is to improve the archer’s health, attack, and defense. It also increases the rage regeneration that allows him to maintain active skill uptime.

Hermann: He is one of the best epic Commanders in this game since his skill can silence the enemy for 2 seconds. He also specializes in the archery, which will further amplify the archer’s march speed and attack in the battle. He has a unique skill that gives him a chance to grant an additional 100 rage when fighting. This skill certainly benefits Kusunoki Masashige a lot.

Julius Caesar: Caesar is undoubtedly a mighty Commander who can give lots of buffs to his partner, and can reduce the enemy’s fighting capability on the battlefield.