In this following guide, we will give you some overview of Julius Caesar’s skills, talent tree, and strategy in Rise of Kingdoms. Hopefully, this guide will help new players how to use Julius Caesar and how to maximize his strength in the game.

Julius Caesar is a legendary Commander who comes from Rome’s nation. He is quite a good legendary Commander since he can control any type of unit, and he also has the ability to bring more troops with him to the open-field battles or to attack other governor’s cities. In addition, his offensive and defensive skills bring lots of bonuses to his troops.

To summon Julius Caesar, you will need 10 of Julius Caesar sculptures, which can obtain throughout events, the VIP shop, golden chests.

The indomitable army is an active skill that you want to max out first since it gives his troops 20% more attack and defense as well as 30% more attack damage. These bonuses will definitely benefit his army during his conquer on the battlefield.

Divine Julius is a solid passive skill that can negate a lot of damage from the enemy. When his army has less than 60% of the total units, his troops have a 10% chance to 30% less damage taken. In total, at max level, this passive skill gives him a 40% damage reduction.

City Killer is definitely the skill when you want to attack other governor’s cities. At max level, it reduces 30% of enemy defense, which will bring huge destruction to the enemy’s cities.

It is a powerful passive skill. To be able to bring more troops on the battlefield will increase the overall damage and defense of Caesar’s troops.

This is the upgrade version of Indomitable Army. The bonus effects are still the same, but Caesar can now deal 400 damage to the enemy. It is a decent amount of damage, but it is a nice bonus because it can reduce some of the enemy’s units in the battle. 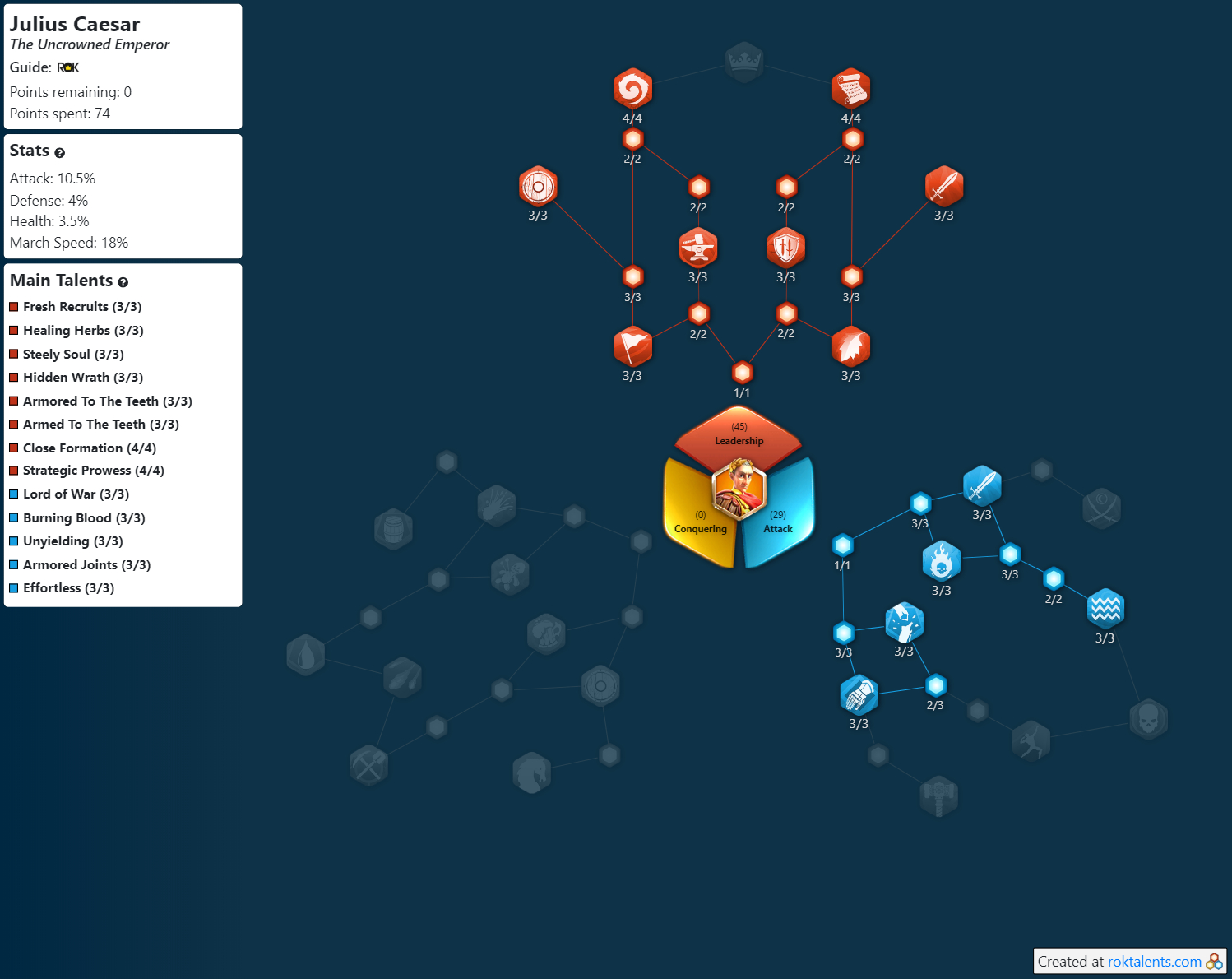 If you want to bring many types of units, this is the talent build you want. This build focuses on increasing the defense and attack of Caesar’s troops on the battlefield. It also gives additional damage when bringing multiple unit types. 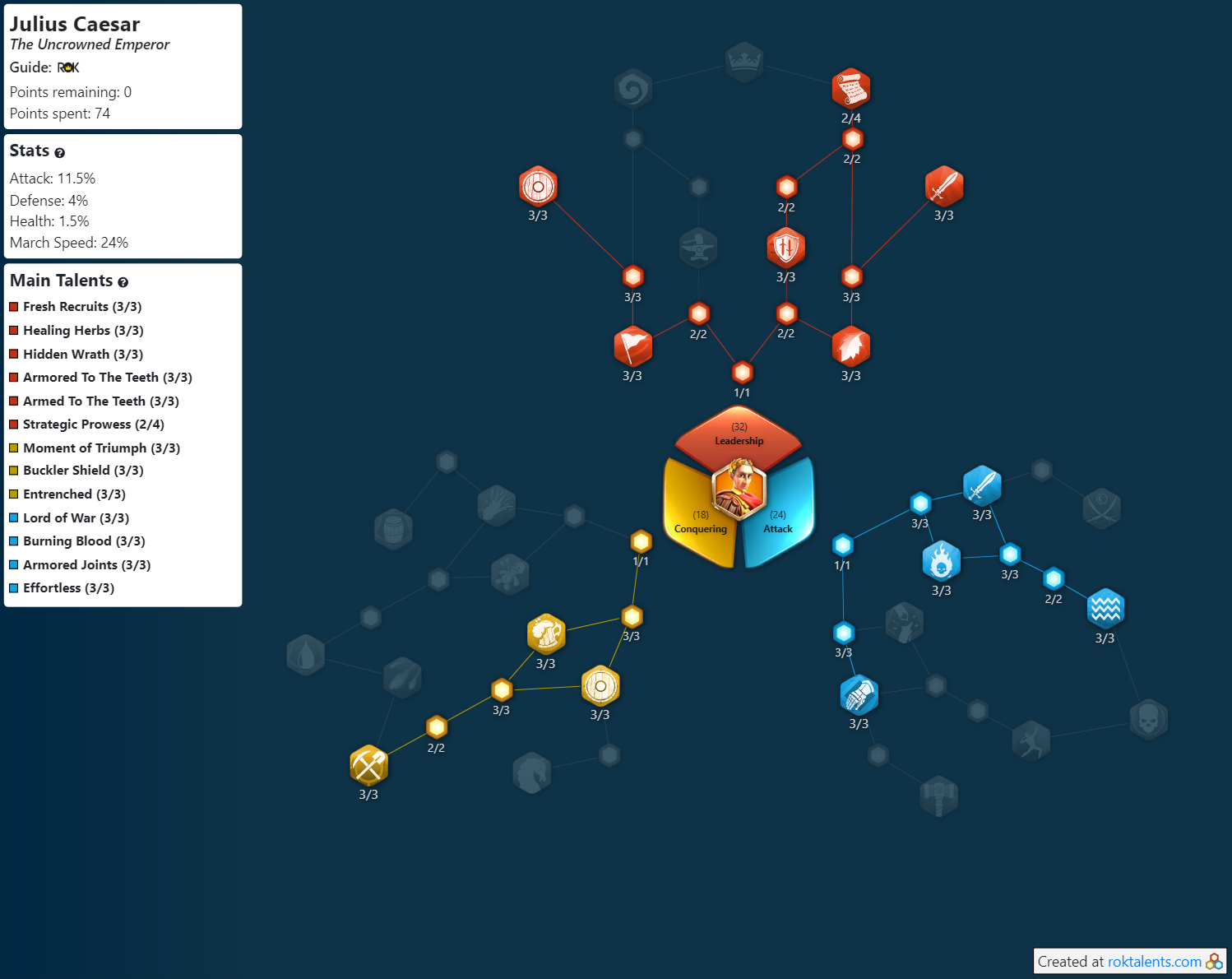 This build is much like PvP Talent Build, but it has some changes. Since it is the Conqueror Talent Build, some nodes from the Conquering branch that reduce the counterattack, and the damage attack from strongholds must be taken.

Because Caesar is one of the oldest Commander in Rise of Kingdoms, he is not as strong as he used to be at the early stage of this game. But it doesn’t mean that now he is useless, he can still serve as a secondary Commander. When he plays as a supporter, he can give lots of useful bonuses to the primary Commander. So, now we will provide some Commanders that can benefit from Caesar’s skills:

Richard I: If you want a defensive combination, then Richard I is the right choice to pair with. Richard I’s skill can further increase the damage reduction, and he can also heal some of the wounded units that certainly minimize the troops’ loss when fighting.

Aethelflaed: Both Aethelflaed and Caesar will benefit to each other a lot when they use multiple unit types of force. Additionally, Aethelflaed’s active skill can reduce the enemy’s defense, attack, health, and the counterattack’s damage, which is quite huge for Caesar since both of them can make the enemy’s attack hardly deal anything.

Scipio Africanus: He is a decent choice, his skills are quite similar to Caesar’s skills. Both come with powerful buffs and have the ability to raise the maximum troop capacity that makes them a hefty force in the battle.