In this following guide, we will give you some overview of Hermann’s skills, talent tree, and strategy in Rise of Kingdoms. Hopefully, this guide will help new players how to use Hermann and how to maximize his strength in the game.

Hermann is the starting Commander who comes from Germany. He has an active skill that can strike and silence the enemy for 2 seconds, which can effectively counter strong support or nuker Commanders. He is undoubtedly a dreadful opponent to the enemy on the battlefield.

To summon Hermann, you will need 10 of his sculptures, which can obtain throughout events, the VIP shop, golden chests.

No doubt that Ambush is one of the best active skills in the game. At max level, it deals 750 damage to the enemy and also reduces the enemy’s rage by 100. Furthermore, it silences them for 2 seconds. This makes Hermann’s opponent incapacitate their nuking/supporting ability since it reduces their rage and prevents them from using their strength while they are silenced. He is a deadly force toward the nuking/supporting Commanders.

Military Genius is a solid passive skill that gives Herman’s archer units 10% more attack and march speed. This skill works best when you use the pure archer build.

This passive skill improves the attack of garrison and watchtower by 7% when Hermann is serving as a garrison Commander. When combining with the silence skill, he can quickly push back the invaders from your city.

At max level, National Hero provides 10% damage to Hermann’s troops. His troops’ attack also has a 10% chance to restore 100 rage, which is nice since it gives him a high probability of activating active skill frequently.

Dead End enhances the active skill by raising the damage factor by 400 while the adverse effects toward the enemy remain the same. 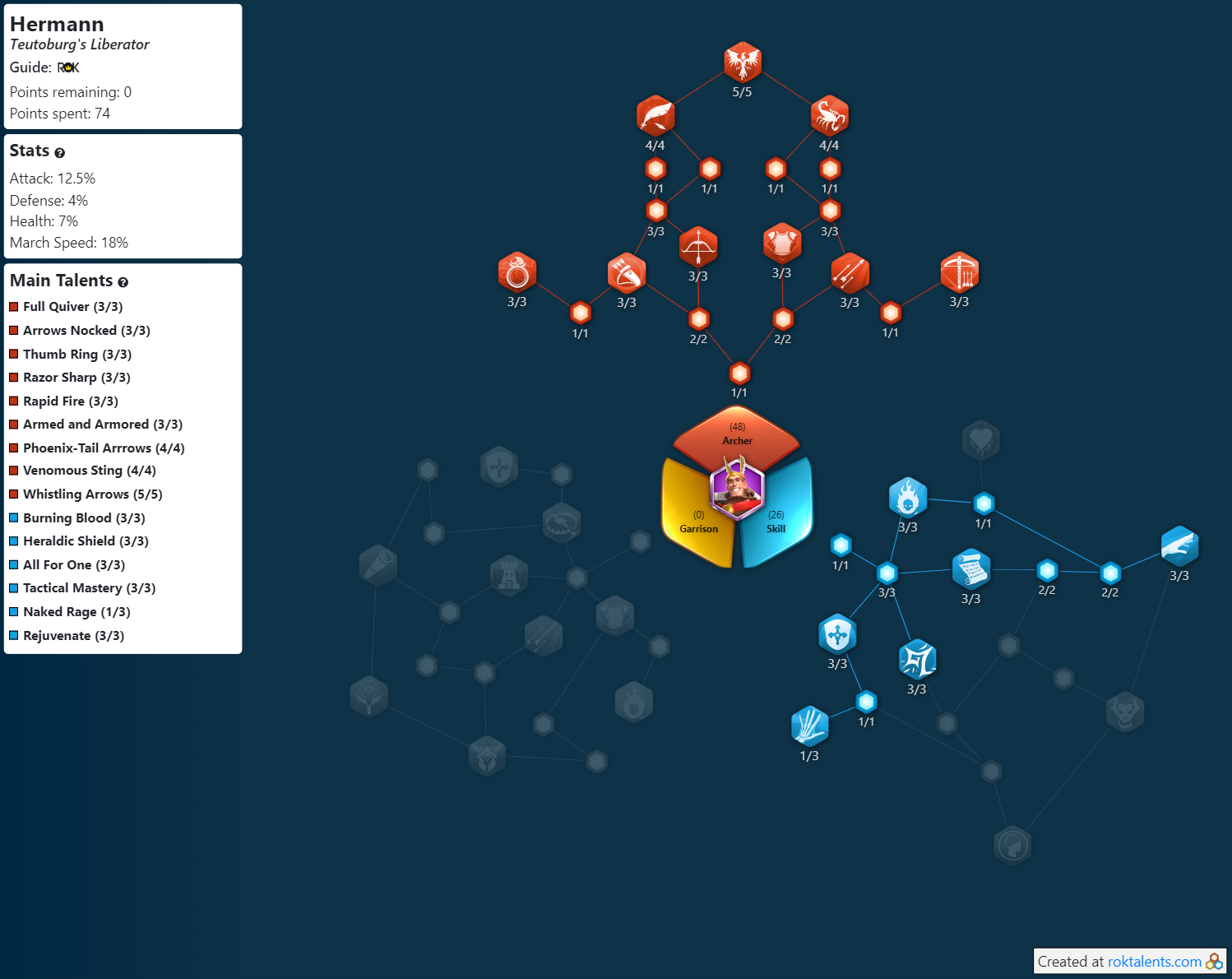 This talent build will maximize the archer units’ fighting capability in the battle as well as the rage regeneration that let Hermann maintain his active skill uptime.

Julius Caesar: Julius Caesar can command any type of troops. Since Hermann is good at controlling archer units, it will be the best when they use the pure archer build. This pair mostly about crowd control thanks to the silence from Hermann and the debuffs from Julius Caesar, which will reduce the enemy’s combat effectiveness in the battle.

Edward of Woodstock: If you want to take down the enemy with the strong force, then Edward is a very good choice. All of his skills focus on boosting the archer’s stats, such as health, attack, and march speed. Although both Hermann and Edward skills are lack of defense, it can partly be solved thanks to the Hermann silence and rage reduction.