In this following guide, we will give you some overview of Guan Yu’s skills, talent tree, and strategy in Rise of Kingdoms. Hopefully, this guide will help new players how to use Guan Yu and how to maximize his strength in the game.

Guan Yu is a legendary Commander who comes from China nation. He was released along with Leonidas I, and he is considered one of the most influential damage dealers in the game. Just like Sun Tzu, who also comes from the same nation, he specializes in the infantry. He can easily dominate the enemy with his skills. Guan Yu is the one that many players don’t want to face on the battlefield.

Guan Yu is only available when the kingdom reaches 310 days. To summon him, you will need 10 of his sculptures, which can obtain throughout events, the VIP shop, golden chests.

Five Tiger Generals is a passive skill that increases Guan Yu’s attack when he is attacking a garrison. This passive skill also lets him have a small chance to reduce the enemy’s attack by 30%, which will strengthen his attack against the enemy’s garrison.

It is a solid passive skill. It gives 30% more attack and 15% more march speed to Guan Yu’s infantry units. Not to mention that every time Guan Yu leaves a battle, his troops receive a healing factor of 1000, which is a very nice bonus since it reduces the resource needed to heal, and it extends his army lifespan.

Green Dragon Crescent Blade is an insane passive skill since it gives a huge amount of bonus damage to the target. In addition, the chance of dealing bonus damage is very high (50%) that makes him one of the deadliest Commander in the game.

This passive skill works best if Guan Yu pairs with a Commander who can generate a shield to further increases his destructive active skill. The bonus march speed is very nice since it helps increase the mobility of Guan Yu on the map. 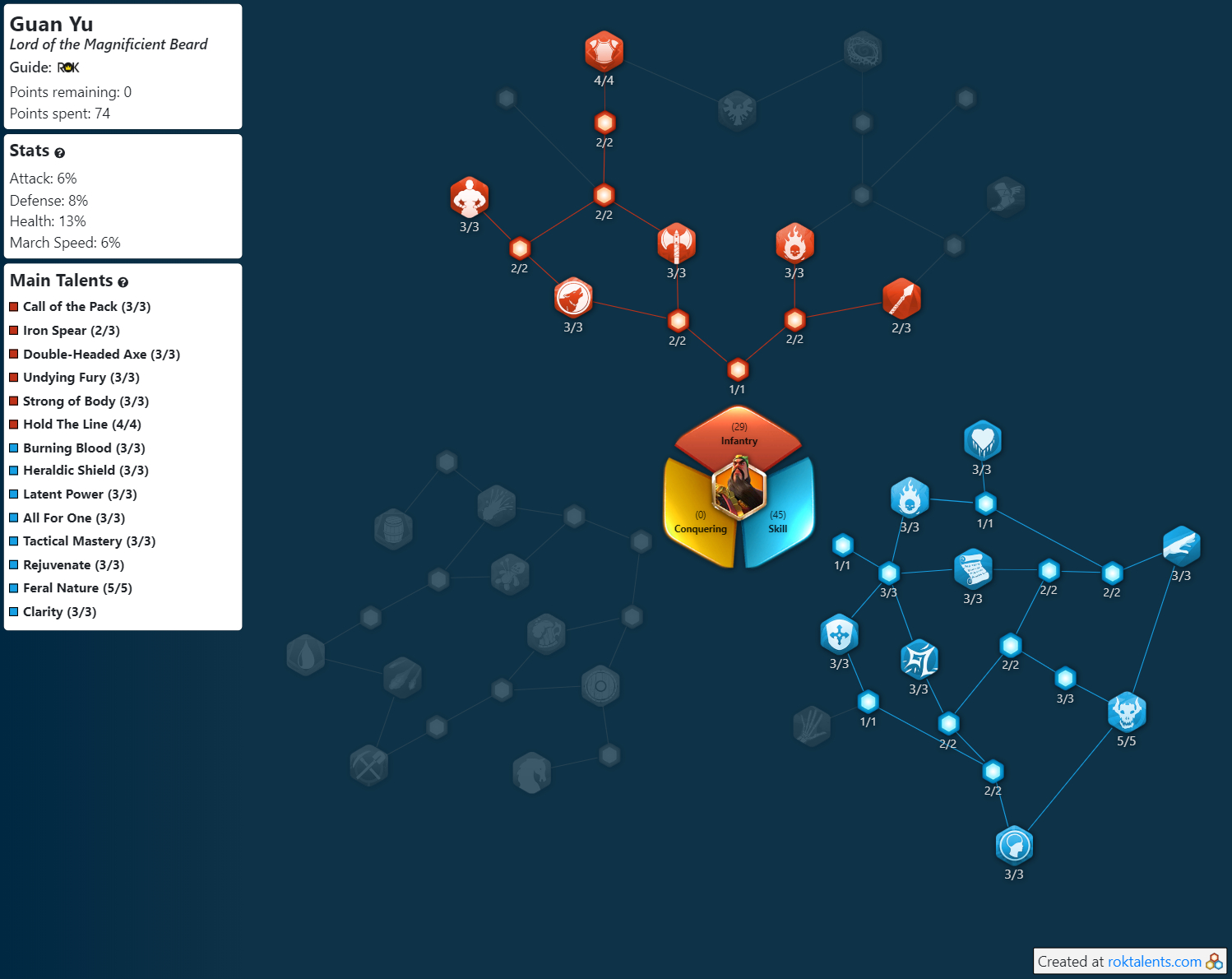 This talent build will maximize his rage regeneration in the battle, let him use his active skill more frequently. It also improves the defense and attack of his infantry units.

Alexander the Great: He is the best match for Guan Yu, mainly because he can provide what Guan Yu is lack of, which is defense. Alexander has the ability to generate a shield that can protect himself and Guan Yu. Additionally, when Alexander generates his shield, part of the incoming damage is reflected back to the attackers. Those attackers also receive 30% more damage taken for 4 seconds. This is a perfect combination since they both strong in defense and offense.

Leonidas I: Just like Alexander the Great, Leonidas I is also a solid defensive Commander. He provides less defense than Alexander, but he can give Guan Yu lots of bonuses in exchange, such as 40% more damage while they are on the map, and the speed of rage is further amplified by 15%.