In this following guide, we will give you some overview of Genghis Khan’s skills, talent tree, and strategy in Rise of Kingdoms. Hopefully, this guide will help you how to use Genghis Khan and how to maximize his strength in the game.

Genghis Khan is the first and the greatest empire of the Mongol Empire. He is also one of the best nuking and cavalry Commanders in the game. His ability can easily neutralize the enemy by dealing a massive amount of damage to them. It is why many players want to own him because of the insane damage and mobility.

Genghis Khan is only available when the Kingdom reaches 120 days old. To summon him, you will need 10 of his sculptures, which can obtain throughout the VIP shop, and golden chests. You can also take part in the Fortune Wheel event to get his sculptures.

At max level, Chosen One deals 1,700 damage to a single target, which is why Khan is one of the top damage dealers in the game. The rage requirement also reduces by 50 than usual, which lets him able to maintain his active skill uptime. Perfect for striking the enemy quickly and deadly.

This is an outstanding passive skill. It reduces the amount of needed rage for activating the active skill by 100, which means that Khan only needs 850 rage to be able to trigger his ability. This passive skill also gives 15% march speed to his troops. However, when his troops in under attack, they will lost the 15% extra march speed and will slow down by 30% more, which is quite annoying when multiple enemies surround Khan.

Nomadic Empire will increase the damage of Khan’s troops by 30% when his troops’ strength is above 70%. This passive skill will give him lots of advantages at the beginning of the combat.

This is another excellent passive skill that improves Khan’s skill damage by 30%, which means that his active skill damage is 2,210. Genghis Khan also gains 25 more rage every time the enemy attacks his troops. This effect triggers when his army’s strength falls below 50%.

You surely want to run the pure cavalry build after unlocking this skill. This passive skill simply gives Khan a 30% chance to recast his active power with no cost immediately, which is fantastic on the battlefield since it can significantly reduce the enemy’s troops after triggering. 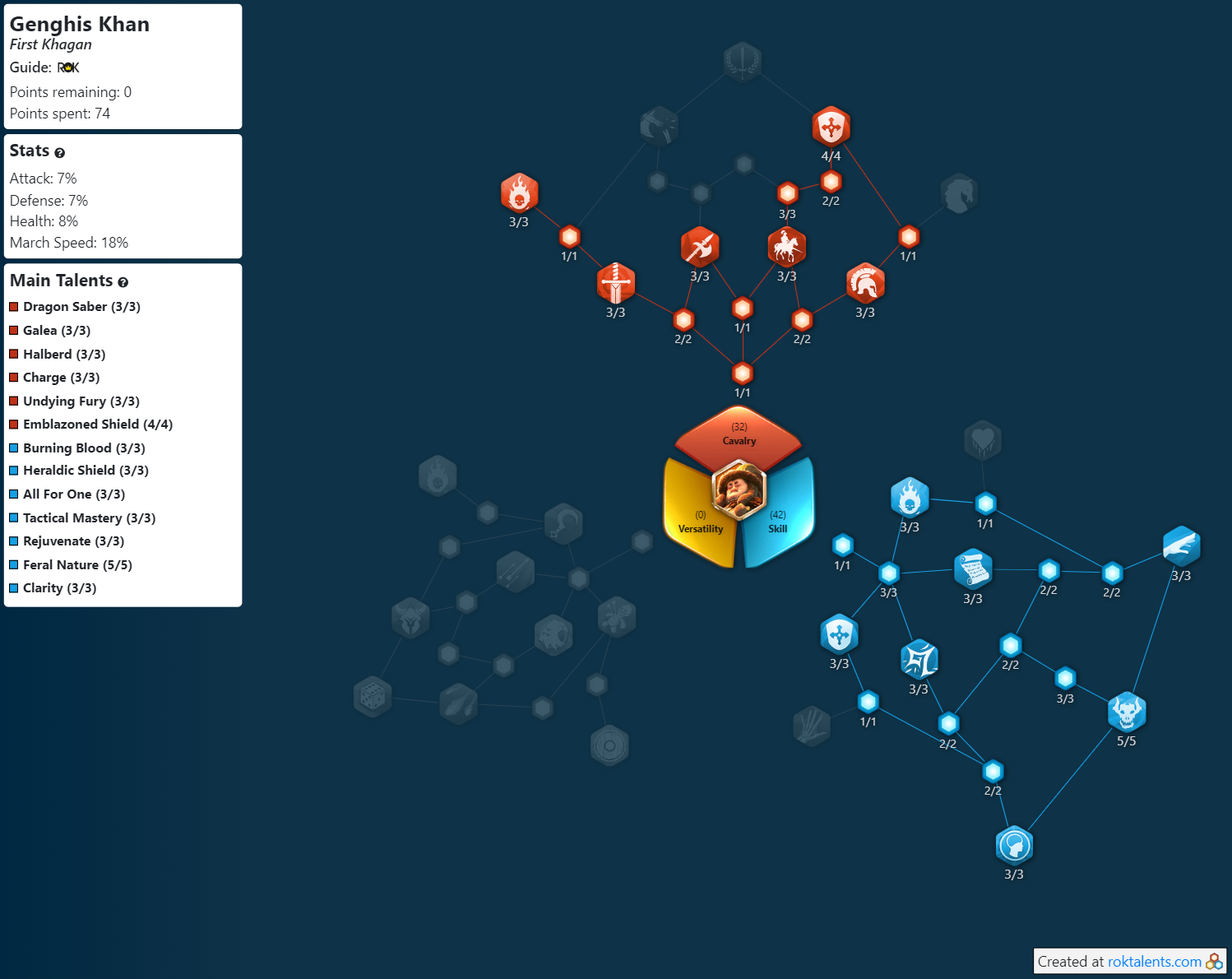 Since most of Genghis Khan’s skills involving giving bonuses to the cavalry units, it is the best for him and his partner to use the pure cavalry build to utilize Khan’s strength.

Cao Cao: If you want to further improve the mobility of Khan’s troops on the map, Cao Cao is the best option. He also improves Khan’s defense by significantly reducing the enemy’s attack with his active skill. Besides, Cao Cao has a passive ability that enhances rage regeneration and heals wounded soldiers. He certainly benefits Khan a lot in both PvP and PvE.

Takeda Shingen: Takeda Shingen is a strong debuffer that can amplify the skill damage taken to the enemy. He also excels at providing defensive stats to himself and his ally.