In this following guide, we will give you some overview of Eulji Mundeok’s skills, talent tree, and strategy in Rise of Kingdoms. Hopefully, this guide will help new players how to use Eulji Mundeok and how to maximize his strength in the game.

Eulji Mundeok is a starting epic Commander who comes from Korea. He is one of the best infantry Commanders among all of the epic Commanders in the game. He is capable of dealing a large amount of damage to the enemy as well as playing as a reliable garrison Commander.

To summon Eulji Mundeok, you will need 10 of his sculptures, which can obtain throughout events, the VIP shop, golden chests.

Water Attack is a powerful active skill that deals 750 damage to the target. It also reduces the target’s defense by 30% for 2 seconds. This amount of damage and its effect is considerably huge for an epic Commander.

This passive skill just simply gives your troops 5% more defense when Eulji Mundeok is playing as a garrison Commander.

Battle of Salsu is a solid passive skill that gives an extra 10% of attack and defense of infantry units. This works best when playing pure infantry build. It improves the infantry’s strength against the enemy on the battlefield.

This is an outstanding passive skill. Although it has a low proc chance, the 100% damage bonus certainly gives Eulji Mundeok’s troops better overall damage in the battle.

This is the enhancement version of Battle of Salsu. It adds 5% more attack and defense to the original passive skill. 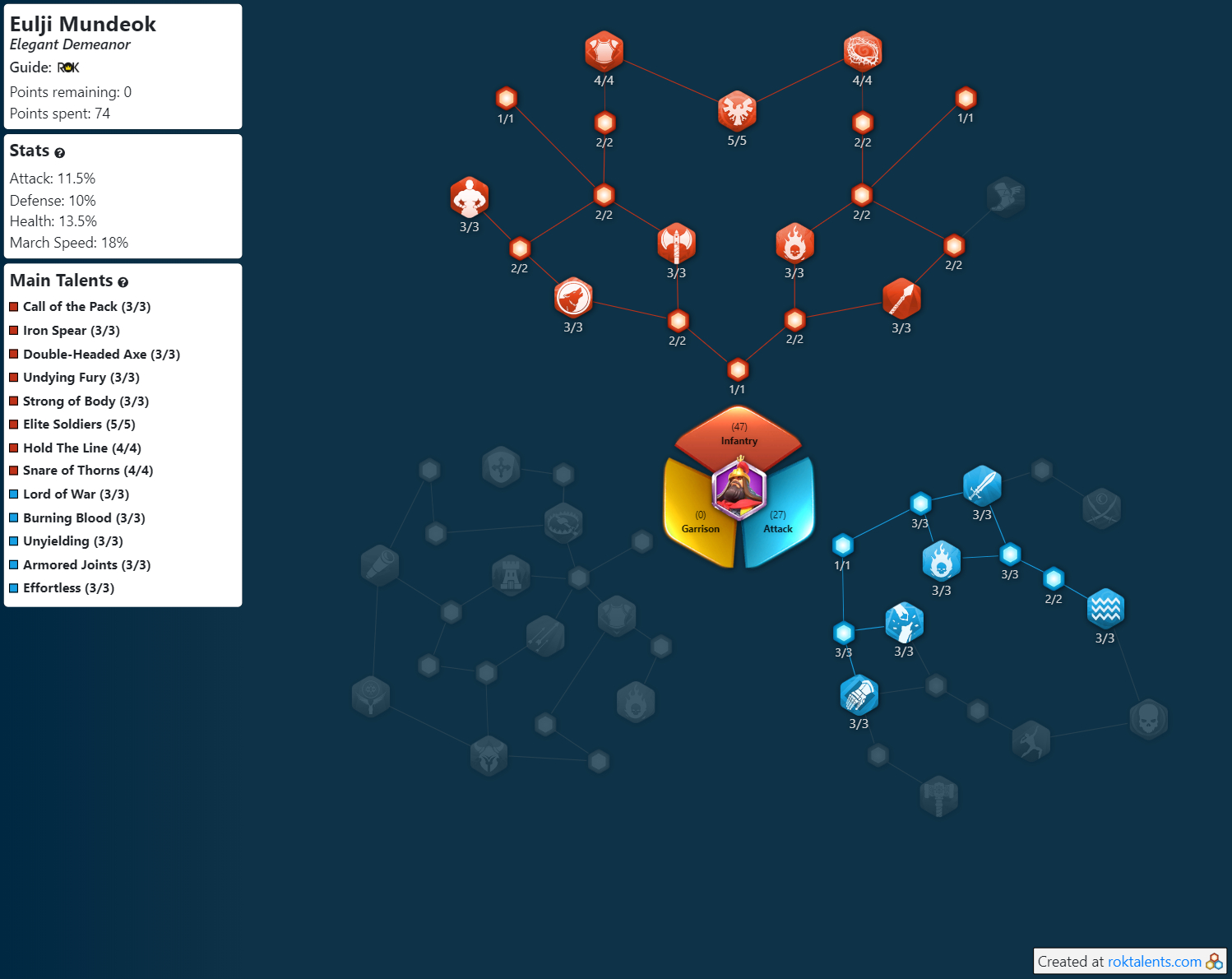 Eulji Mundeok is quite suitable for PvP battles because of his mighty active skill as well as lots of bonus toward infantry units. This talent build will improve his rage regeneration, his infantry’s health, defense, attack, and march speed – everything you need for PvP.

Julius Caesar: Caesar can strengthen the troops’ power by giving powerful buffs such as an extra attack, defense, and damage reduction. He also is capable of bringing more troops into the battlefield.

Caesar should be the primary Commander in this pair.

Sun Tzu: Sun Tzu is also a quite good epic Commander. He can cover Eulji Mundeok’s weakness by his active skill, which is to deal with multiple enemies. He also has an ability that can amplify the active skill damage by 20% as well as give bonus health and damage reduction to infantry units.

Sun Tzu should be the primary Commander.