In this following guide, we will give you some overview of Edward of Woodstock’s skills, talent tree, and strategy in Rise of Kingdoms. Hopefully, this guide will help new players how to use Edward of Woodstock and how to maximize his strength in the game.

Edward of Woodstock is a legendary Commander from Britain’s nation. He will be available when your kingdom turns 120 days old. We can say that he is one of the best archery Commanders in the game. Unlike Boudica or other offensive Commanders, he can deal an enormous amount of damage to the enemy in the battle, which makes him a very good choice for PvP.

Archer’s Honor is a very powerful active skill that can deal a huge amount of damage to a single target. Not many legendary Commander in the damage can deal that amount of damage like him. But it comes with a price, the rage requirement is much higher than normal, and after using the active skill, his troops’ rage will be reduced by 300. On the other hand, it is certainly a strong skill that needs to be maxed out first.

The 30% more march speed bonus will improve Edward’s mobility while he is on the map. Also, 30% more health will help his archer units tankier.

If Edward’s army contains only archer units, his active skill will deal 25% more damage, which make him easier to melt down the enemy on the battleground with the damage factor of 2,750. In addition, his archer units deal 5% more damage to infantry units.

Limoges’ Ambush just simply gives 40% additional damage to Edward’s archer while his army is above 70% strength. A very nice boost to his troops.

This passive skill will increase Edward’s overall damage toward the enemy. It is even better if he has fast rage regeneration to constantly use his active skill. This can be done by using the right talent build and pair him with a suitable Commander.

Base on his set of skills, the PvP talent build certainly works best for him. 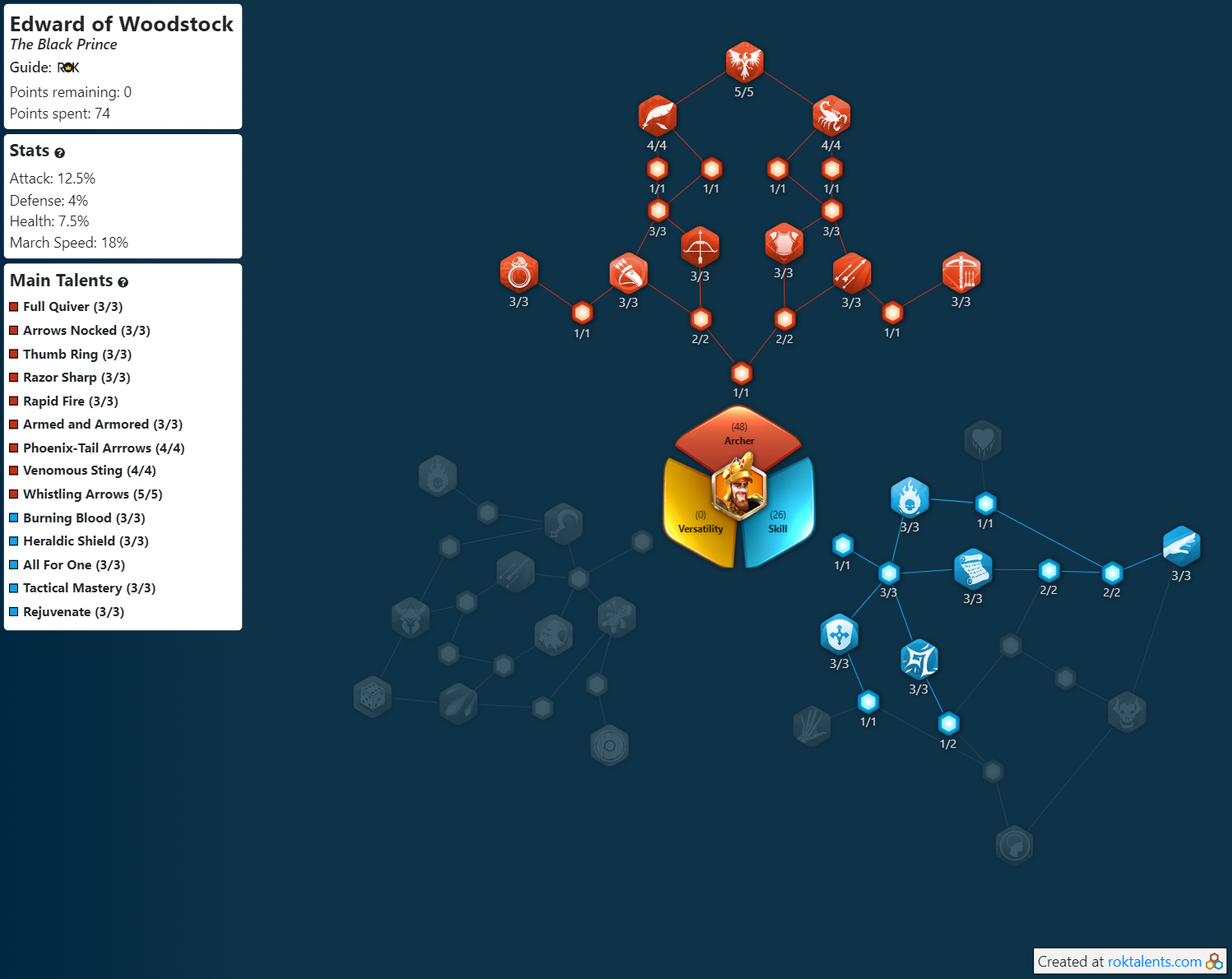 This talent build will push his overall damage even more since it mostly focuses on taking damage and rage restore nodes. We also invest in some defensive nodes can give him a little bit of defense.

Pairing Commanders for Edward of Woodstock

Yi Seong-Gye: If you want a Commander that can massively boost Edward’s active skill as well as the archers’ damage, Yi Seong-Gye is definitely the best choice. He can give Edward’s active skill 50% more damage, and also a bonus rage restoration that is very useful since Edward needs lots of rage to use his skill. Yi Seong-Gye can shoot arrows to multiple enemies at the same time if you want to do some splash damage. He can hit up to 5 enemies.

Ramesses II: Ramesses is a reliable Commander that can give Edward some amount of necessary defense. Besides, Ramesses II can reduce the enemy’s defense, which let them take more damage. He can prevent the enemy from healing for 2 seconds, which is very useful in the long fight.