In this following guide, we will give you some overview of Constantine I’s skills, talent tree, and strategy in Rise of Kingdoms. Hopefully, this guide will help new players how to use Constantine I and how to maximize his strength in the game.

Constantine I is a legendary Commander from Byzantium nation. Opposing to Belisarius, who has very high mobility and cavalry prowess in the battle, Constantine I is excellent at defense. He is considered one of the best defensive Commanders in the game thanks to his designed skills and talent build.

To summon Constantine I, you will need 10 of Constantine I sculptures, which can obtain throughout events, the VIP shop, golden chests.

This is a solid defensive active skill. It can reduce the enemy’s attack by 40% and the taken damage by 10%, which will mitigate a huge amount of damage when Constantine I faces a strong nuker.

Allegiance gives a huge boost to the infantry’s health. It works best when Constantine I runs infantry units only.

If you want to play Constantine I as a garrison Commander, this skill is a must-have since it gives garrison and watchtower damage 10% more damage.

Cross of the Divine is a unique skill and has an unusual restriction. It gives him a healing factor of 15000, which is a very large amount. It also reduces the skill damage taken by 40% if he has a shield, but it only applies when his troops’ strength falls below 50%, and he can only receive 70% of the amount of healing. This effect can only be triggered once every hour.

Recommended Talent Builds for Constantine I

This build mostly focuses on increasing his capabilities as the Garrison Commander, improving the watchtower and garrison defense and attack. It also increases his main stats like health, attack, and defense. Rage restoration is very important, so we invest in all rage-related nodes that let him use his active skill more frequently in the battle. 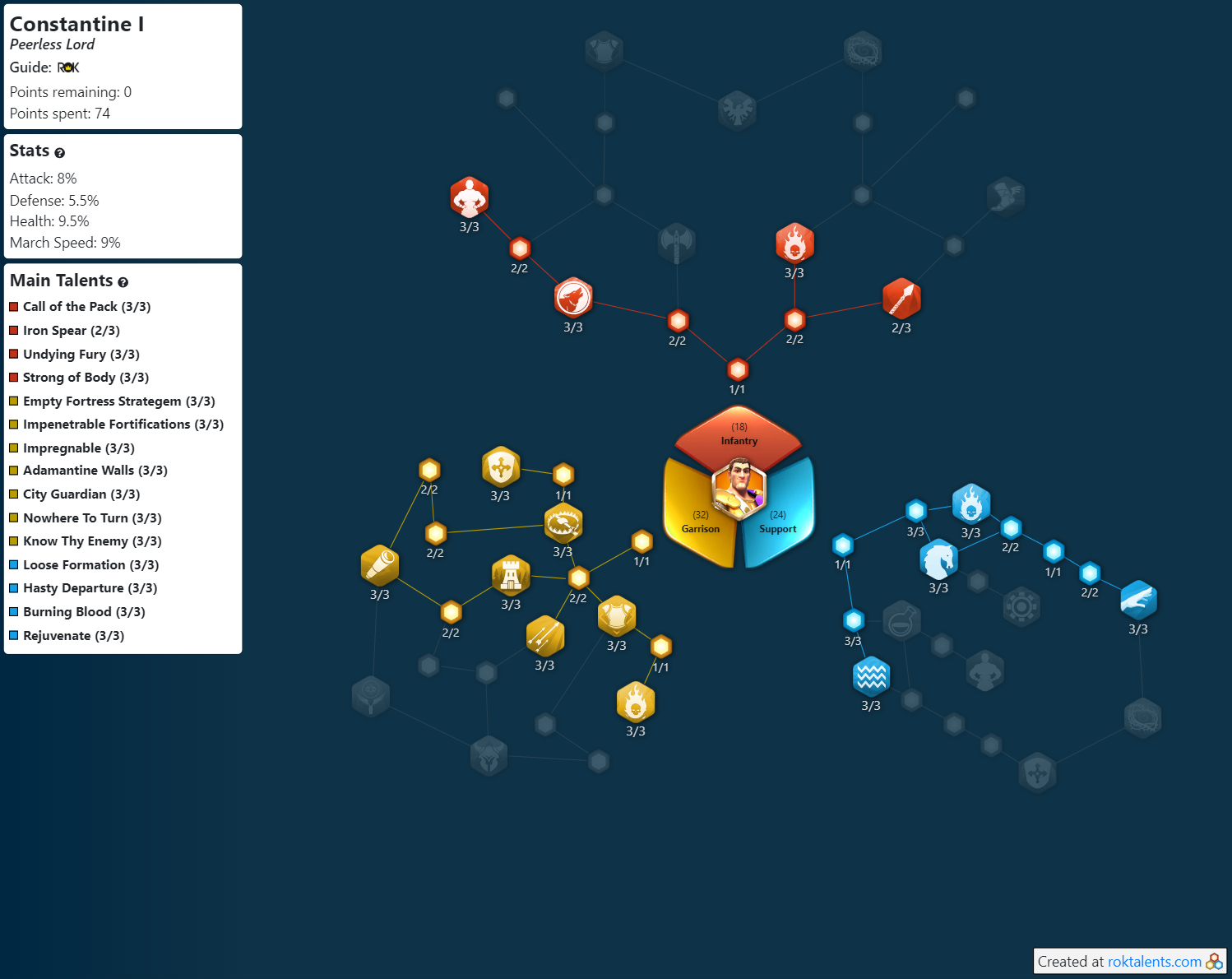 This is a different version of the Garrison Talent Build. It focuses more on his troops’ stats rather than garrison and watchtower. 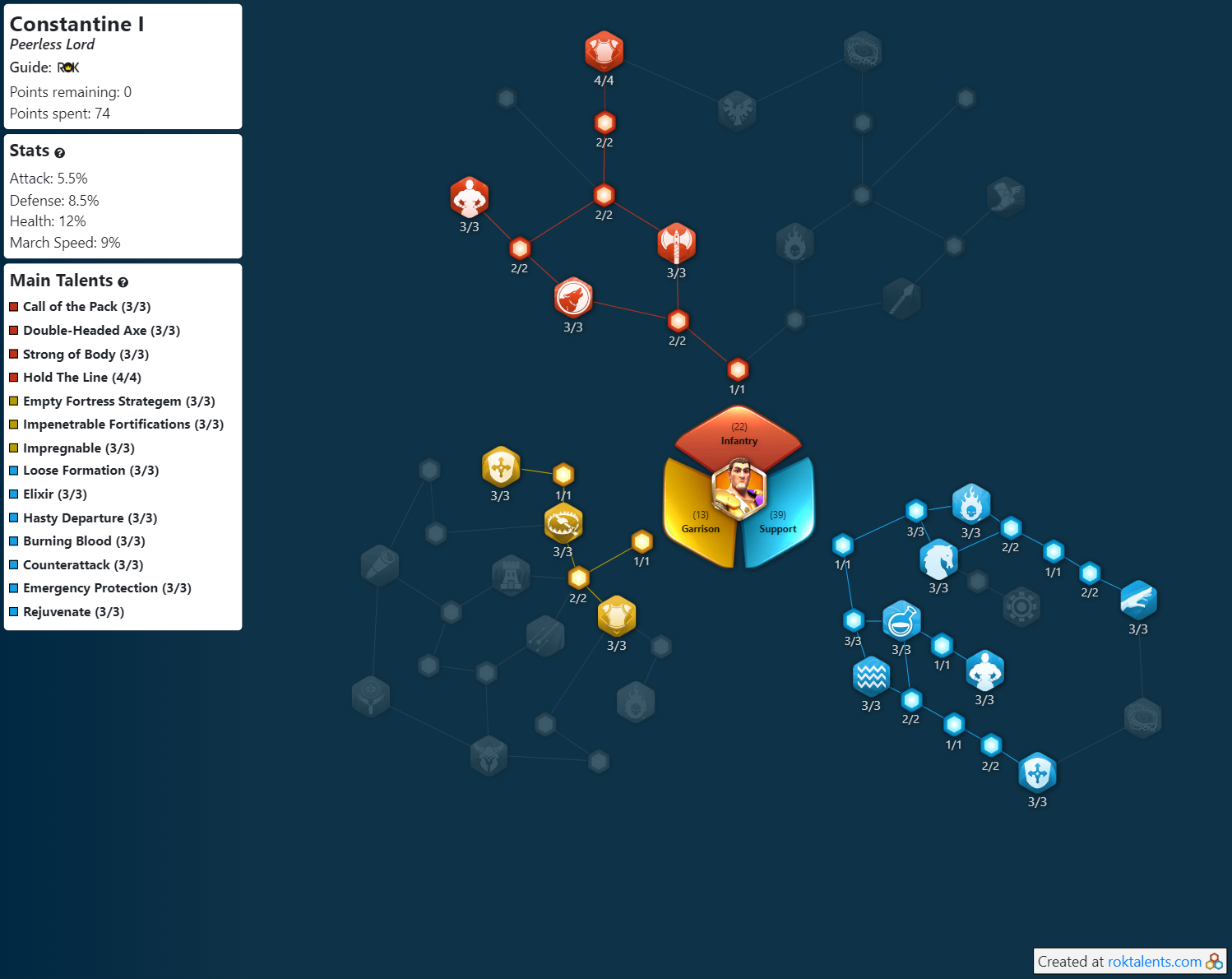 If you want to take advantage of his massive healing, you should use this build instead. This talent build will boost his healing effect as well as rage regeneration. Besides, his infantry armies also gain a large amount of health, defense, and attack bonus. 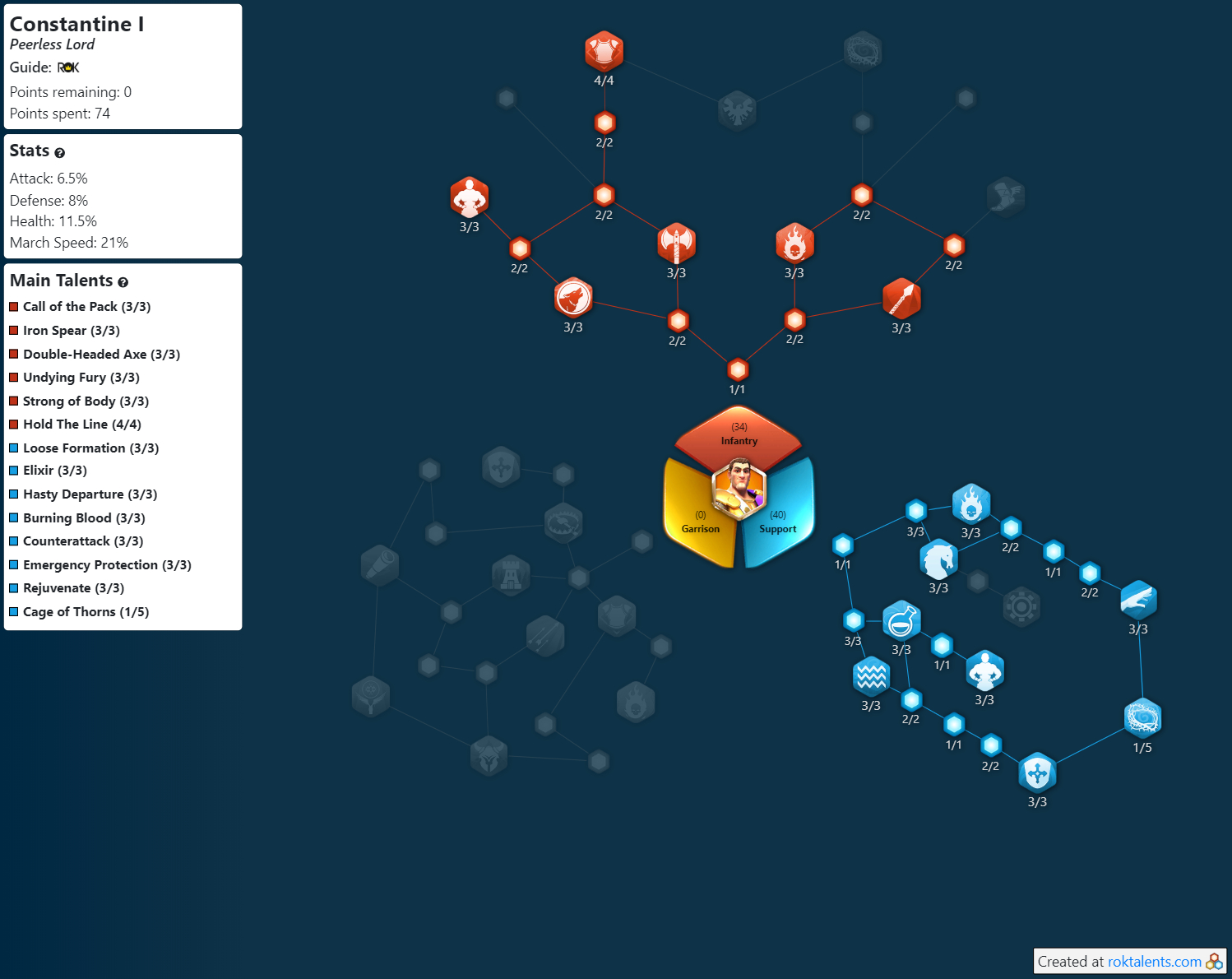 Pairing Commanders for Constantine I

Alexander the Great: This definitely the best partner for Constantine I because Alexander can give lots of benefits to him, such as a massive defense boost to infantry troops, bonus attack damage that Constantine I is lack of, a shield that can trigger the 40% skill damage reduction. A solid defensive combination.

Sun Tzu: If you are looking for an epic Commander to pair with Constantine I, then Sun Tzu is perfectly fit with him. He doesn’t have many strong defensive skills comparing to Alexander or Charles Martel, but he can deal a decent amount of damage to multiple enemies at the same time. Sun Tzu’s active skill can also restore rage, which will let Constantine be able to spam his active skill even more.