In this guide, we will show you the best 6 Civilizations in Rise of Kingdoms.

Choosing these civilizations at the beginning, you will receive a great free epic commander and the correct buffs to have a much easier life and grow your city significantly faster than anyone not using the right civilization. 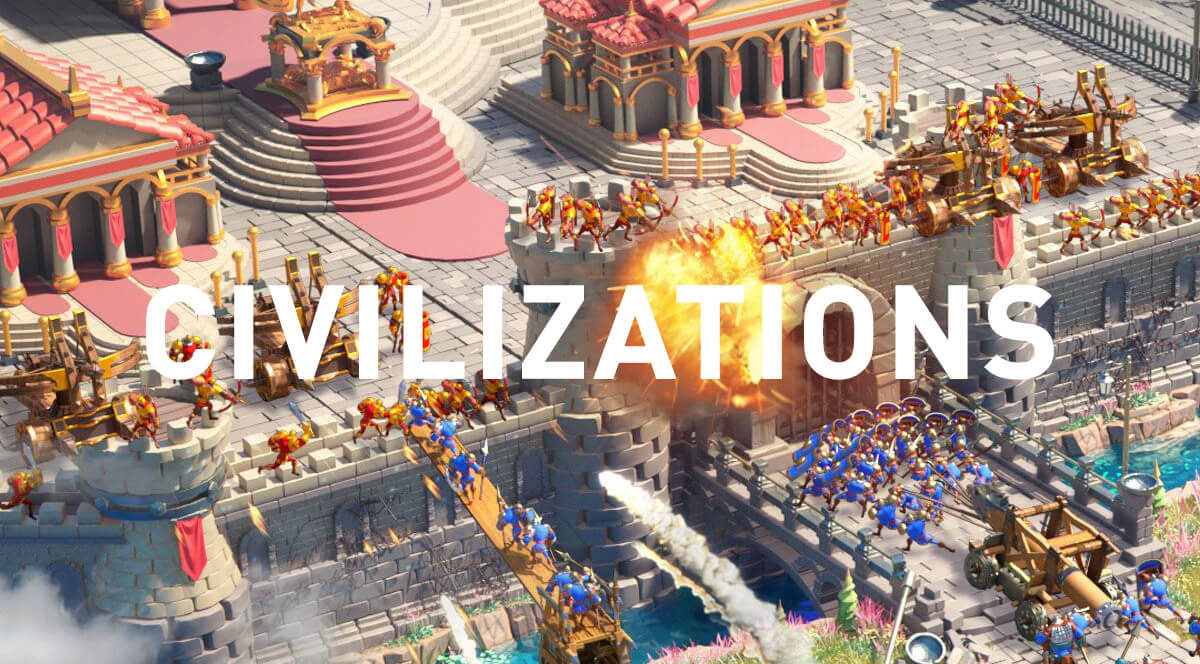 Here are the best civilizations you want to choose at the beginning of the game, assuming that you are not going to spend money, or just a little, into the game. Choosing the right nation to play places you ahead of other players right from the start.

Chinas increases your building speed by 5%, help you upgrade your buildings a lot faster. This is especially helpful at the beginning since you want to be ahead of other players as much as possible.

If you pick China, you will be given Sun Tzu right at the beginning. He is one of the best Epic commanders you can find in the game. You can use him in both PvE and PvP fights. You can use him with any other commander in the game. He is helpful in big combat. Last but not least, he boosts infantry troops, which is the cheapest troops for new players.

Since Sun Tzu is infantry commander, you would want to change your civilization to Rome later since Rome boosts infantry units by a lot.

Choosing France, you will receive Joan of Arc, the best free support commander in the game. She increases your army stats and rage recovery speed by a lot.

You can use Joan of Arc in any combat, fighting either other players or neutral units. Also, she is very great at farming resources. So, there are 2 ways for you to use her. If you use her as the primary commander, upgrade her blue and red talents. If you use her for farming and supporting other commanders, upgrade her farming talents and keep her at 4⭐.

She is definitely the most versatile epic commanders in Rise of Kingdoms.

Once you have reached City Hall level 10, you can switch to other civilization that gives the buffs you need by that time.

Rome is best for using with infantry units. Rome has Scipio, definitely one of the best Epic commanders for infantry playstyle.

If you are in love with infantry, go with Rome.

Infantry units are cheap, best at tanking damage and they can counter cavalry units.

Scipio is also very tanky, dealing great and stable output damage. Best when having Joan of Arc supporting him.

Germany is best for Cavalry. You can pick another civilization to receive the free cavalry commander first before changing to Germany later.

Germany is best for you If you love cavalry.

During the early game, cavalry is best on the battlefield during the early game due to their moving speed. Most experienced players pick Germany, instead of Spain when they start a new account and want to overwhelm other players right from the beginning.

Germany increasing the troop training speed and hospital healing speed, which are always helpful from the early game till the late game, especially if you like doing combats.

Germany’s free Epic Hero is Hermann. Hermann is Archer commander, so he doesn’t get the cavalry buff from Germany. However, he is not weak at all. He has decent nuke damage and has the ability to prevent the enemies from using skills for 2 seconds.

Spain’s cavalry units have the highest damage. Spain also gives you Pelagius, a cavalry commander, at the beginning. This is a plus point for Spain.

It’s best to start with Spain instead of Germany If you are free to play players to get Pelagius. You can switch to Germany later on when your City Hall hits level 10.

Pelagius is the most balance cavalry epic commander. He has nice damage, healing ability and good stats for all new players.

Another cavalry civilization. Why? Because cavalry is just so nice for the beginning.

Similar to Spain, pick Byzantium, get the cavalry epic commander, Belisarius,  for free and switch to Germany once you reached City Hall level 10.

Belisarius is very great for new players and free to play players.

How to change Civilization in Rise of Kingdoms?

Once you have reached City Hall level 10, you will receive an item called Civilization Change.

This item allows you to change your current nation to any other specific nation.

Hopefully, you have found this article helpful and chosen one of the mentioned Civilizations for your start in Rise of Kingdoms.

After reaching City Hall level 10, remember to move to a military-focused civilization.

It is recommended to not use archer units if you are new to the game, or if you are free to play players. Archers are weak in the beginning and very expensive to train. Archer commanders are also expensive to get and max out.

However, if you want to play the game seriously and want to spend some money, Archer is definitely the best one for you!