In this following guide, we will give you some overview of Cao Cao skills, talent tree, and strategy in Rise of Kingdoms. Hopefully, this guide will help new and experienced players to make the most of his strength in the game.

Cao Cao is a legendary Commander from China who specializes in the cavalry. It means that his cavalry unit’s stat will be buff. Not only Cao Cao is a good cavalry Commander, but also he is one of the fastest Commander in Rise of Kingdoms because of his mobility skills, and talent tree. With the right partner and talent tree build, he can be very deadly in the battle.

To summon him, you will need 10 Cao Cao’s sculptures, which can obtain throughout events, the VIP shop, and golden chests.

Dragon Rider is a solid active skill that deals a significant amount of damage to the enemy. It also can reduce the enemy’s attack and march speed, which will weaker the enemy a lot when they try to fight against or run away from you.

This is a very effective ability for PvE, which makes it easy enough for Cao Cao to destroy neutral units with relative ease.

This skill works best if you want to use pure cavalry build. All cavalry units will gain a 30% bonus attack damage and 10% more march speed, which makes him one of the fastest Commanders in the game.

This skill helps Cao Cao to restore rage so he will able to spam his active skill more. It also his troop gets a 1000 healing factor bonus, which will reduce the amount of slightly wounded troops in the battle.

When combining with his 2nd skill, his cavalry unit’s attack damage will have 55% more damage. That definitely a huge increase to his troop damage.

This is definitely a PvP build because it mostly focuses on increasing health, defense, and attack of cavalry units.

There are some nodes that increase Cao Cao’s resistance against the reduction of movement speed.

It is very effective when the enemy Commander has the ability to gain bonus damage while you are slowed. 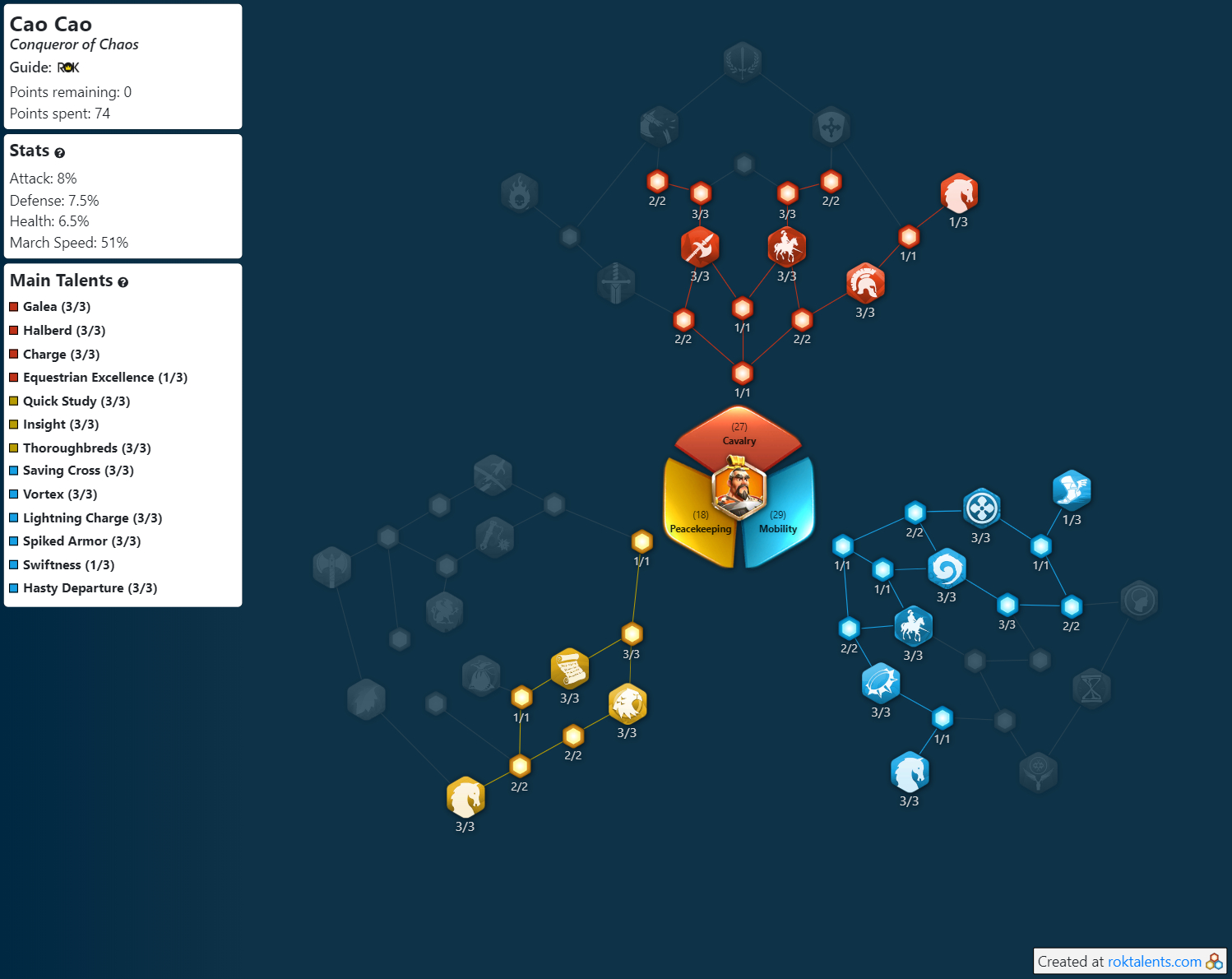 This is an alternative PvP build. Although it has less % attack and defense, it has twice the march speed than the original build.

Cao Cao is a strong Commander that should be in the primary role. He can serve as the secondary role when there is a strong nuker that pairs with him.