In this following guide, we will give you some overview of Belisarius’ skills, talent tree, and strategy in Rise of Kingdoms. Hopefully, this guide will help new players how to use Belisarius and how to maximize her strength in the game.

Belisarius is a featured Commander if you choose Byzantium as your starting civilization. He is an excellent epic Commander who specializes in the cavalry. Unlike other epic cavalry Commanders, who are better at nuking, he is well-known for his mobility, high defense, and debuffs.

To summon Belisarius, you will need 10 of Belisarius sculptures, which can obtain throughout events, the VIP shop, golden chests.

Deception is a mighty active skill since it can decrease the target’s attack and defense by 30%, which can be very useful when he has to deal with a strong nuker. It will mitigate some of the damage which can help him to survive longer in the battle. Then he deals a damage factor of 450 to the same target in the next turn. This skill is definitely needed to max out first.

This passive skill will become very handy if you want to farm some barbarians for EXP and resources.

This is a signature skill of Belisarius. It gives his cavalry units tons of defense, and it also helps his troops gain 30% more march speed after leaving a battle, which is extremely useful when you want to escape from a losing fight or to quickly chase the enemy.

With the help of a secondary Commander who has high damage output, Belisarius will destroy the enemy in no time when their strength is reduced below 50%. It is a very nice passive skill that has to max out.

Although the bonus defense doesn’t change, the 20% more bonus march speed is very nice to have. It certainly benefits you in reaching the target more quickly, let Belisarius does the crowd control on the battlefield.

This talent build mostly focus on mobility. We can see that this talent build gives approximately 50% more march speed. It is great for rushing ahead to give support to your allies, to take down the enemies’ gatherer, or to reach important structures like Alliance flags and fortresses. 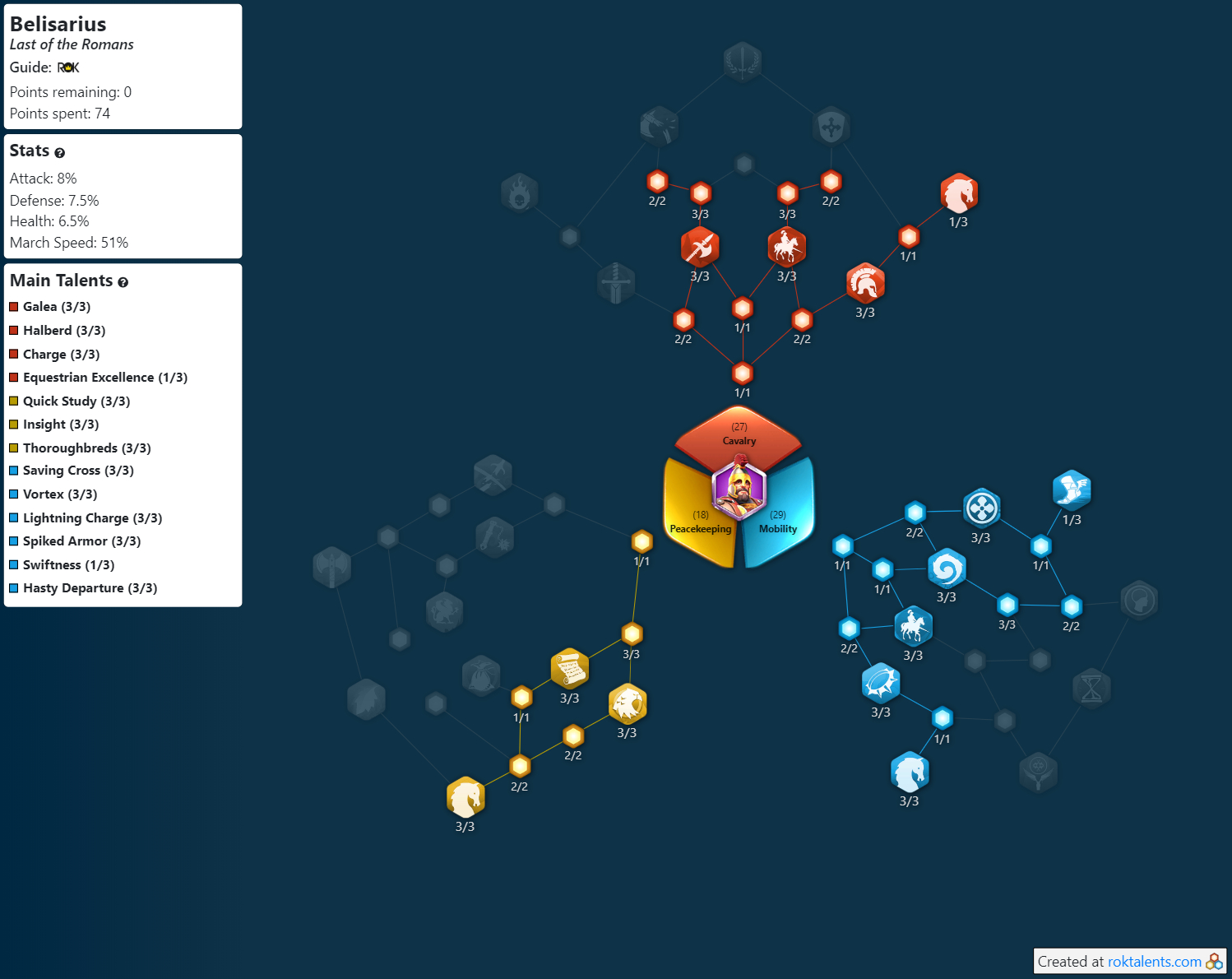 This talent build only gives a small amount of bonus march speed, but it has lots of bonus damage and defense, which is best if you want to use him for PvP. 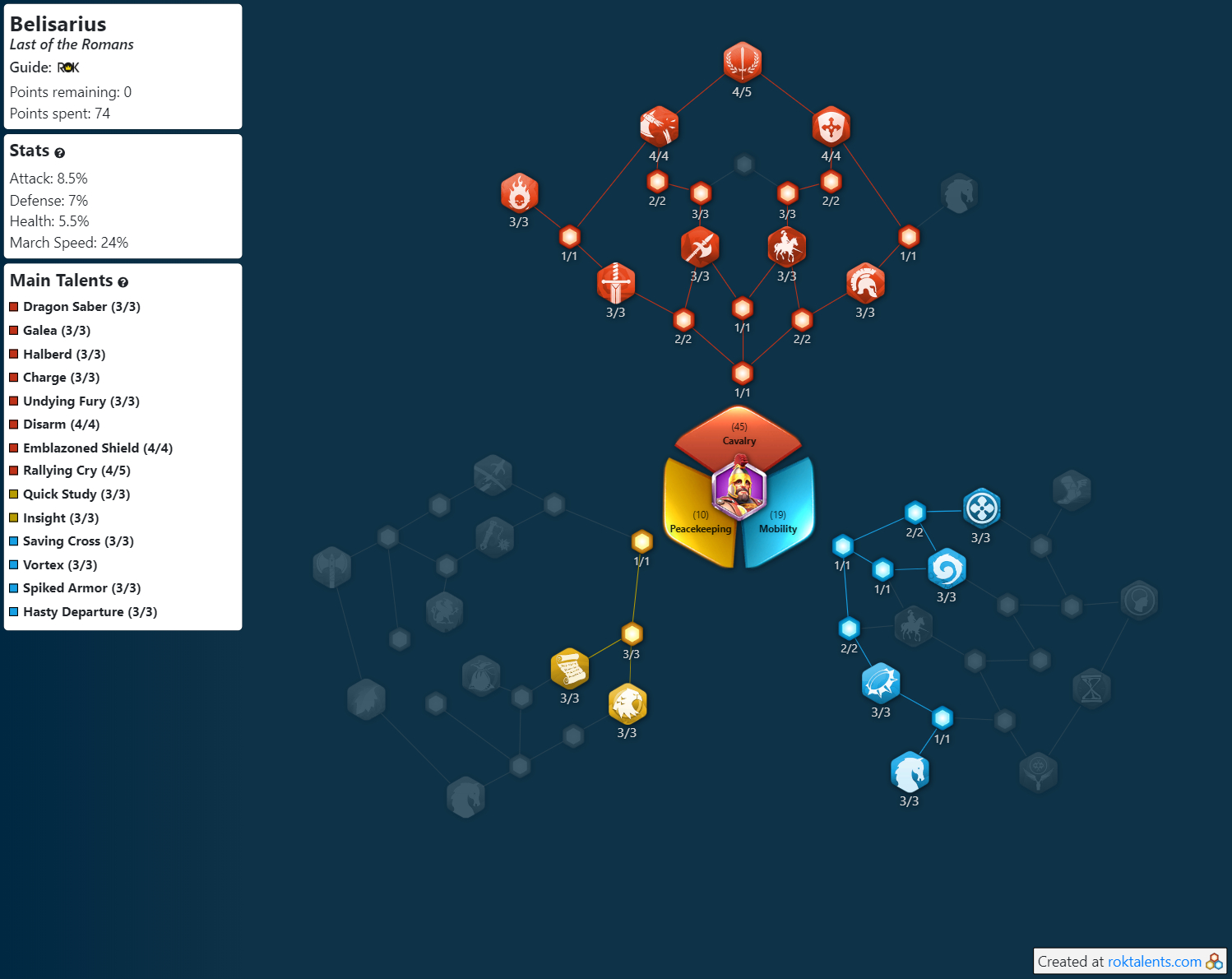 Genghis Khan: He is one of the strongest nukers in the game. Together they can both easily bring the enemy down. Genghis Khan is one of the few legendary Commander in the game that has a chance to activate his active skill without any rage, which is synergy well with the defense reduction form Belisarius. Khan also has passive skills that increase the cavalry march speed, attack damage, and reduce the rage requirement for active skill.

Genghis Khan definitely is the primary Commander in this pair.

Pelagius: This is a defensive combination. The healing from Pelagius and the bonus defense from Belisarius will give the enemy a lot of trouble to take them down. On the other hand, they can do a decent amount of damage thanks to Pelagius’ rage restoration. It also lets them maintain their active skill uptime.

Belisarius should be the primary Commander in this pair.

You can use Mehmed II as a replacement if you want a Commander that can help Belisarius with the crowd control on the field.