In this following guide, we will give you some overview of Baibars’ skills, talent tree, and strategy in Rise of Kingdoms. Hopefully, this guide will help new players how to use Baibars and how to maximize his strength in the game.

Baibars is an Epic starting Commander from Arabia. He is considered one of the best options for F2P players who want to use cavalry as their main troops, as well as a city conquering Commander. He has a solid set of skills that can deal lots of damage to multiple enemies on the battlefield, which is quite good compared to other Epic Commanders.

To summon Baibars, you will need 10 of Baibars sculptures, which can obtain throughout events, the VIP shop, golden chests.

Sandstorm is very useful when it comes to dealing with multiple targets at the same time. It allows him to deal a significant amount of damage to 3 targets and slow them down at the same time. This passive skill can let your allies catch up to your fighting position to support you, and it can prevent the enemy forces from escaping a losing battle.

No Escape is a must-have skill if you want to play him as the city conquering Commander. Baibars’ normal attacks have a 100% chance to reduce the garrison’s attack and defense by 7%, which will reduce the wounded troops and make it easier for Baibars to attack the enemy’s city.

The 50% more march speed is extremely helpful when Baibars troops have only cavalry units. It can help him retreat safely from the battlefield or quickly chase the next target. His troops also receive a healing factor of 200 after every battle.

This skill is an upgrade version of Baibars’ active skill. Blot Out the Sun lets him deal a monstrous amount of damage to 5 different targets in a forward-facing fan-shaped area and slows them down for 2 seconds.

Since his set of skills mainly focuses on PvP, such as dealing damage to multiple enemies and slow them down, which is very effective in the battle, it will be a waste if you invest many points in the Conquering branch.

This following talent build will maximize the overall damage by increasing the main stats, which are attack, defense, health, and march speed. Rage restoration is very important in PvP, so it is essential to take all of the nodes that involve rage gain. 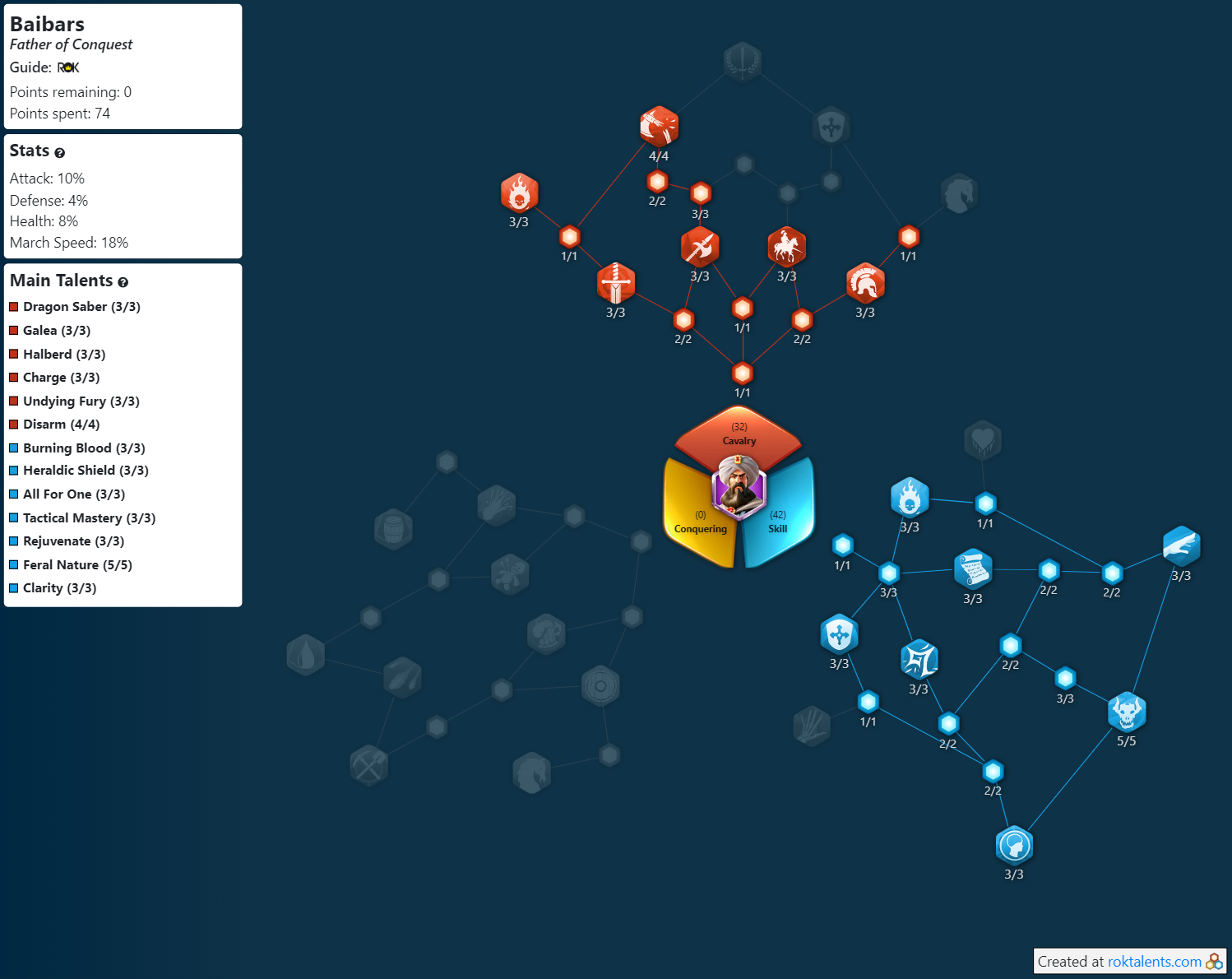 Cao Cao: Needless to say, Cao Cao is the fastest Commander in the game. Thanks to Cao Cao’s skills, you can move around quickly in the battle, which can be very helpful if you want to help your allies, chase the enemy or to ambush the enemy’s gatherer secretly. Besides, you can use this pair for efficiency farming the barbarian by using the chain-farming trick.

Cao Cao should be the primary Commander in this pair.

If you don’t own Cao Cao yet, you can use Pelagius as a replacement.

Genghis Khan: He is a very powerful nuker that can easily wipe the enemies out of the battle. If you want a Commander that can quickly slaughter the enemy, Genghis Khan is the chosen one. He has abilities that can reduce the rage requirement, give bonus damage to both troops and active skill, and increase the cavalry’s march speed. In conclusion, this is a very deadly combo on the battlefield.

Genghis Khan should be the primary Commander.