In this following guide, we will give you some overview of Attila skills, talent tree, and strategy in Rise of Kingdoms. Hopefully, this guide will help new and experienced players to make the most of her strength in the game.

He is a special legendary Commander because he is only available after 240 days in Rise of Kingdoms. He is considered one of the best support Commander in Rise of Kingdom to play with. His ability mainly increases his troop’s defense and attack damage.

When pairing with the right Commander, this duo can be the most fearsome army in the battle.

Attila troops will gain a 30% normal attack and counter-attack damage bonus for 4 seconds. Additionally, he can reduce the enemy’s troop attack by 50% for 2 seconds with his regular attack. It is quite a strong skill; it has lots of good bonuses and has a long active time.

The defense reduction is huge when attacking a garrison. It will help Attila’s troops to take down the enemy easier and faster, and it is also has a 10% damage bonus towards enemy garrison.

It is a must-have ability. You can use the star upgrade trick to unlock this skill. It is a very effective skill against Commanders that have a high damage active skill like Mehmed II or Yi Seong-Gye, it will weaker their active skill. This skill also has a very nice damage bonus to the cavalry unit (up to 40%) and helps faster their march speed by 15%. You should invest in this skill right after maxing out Attila’s 1st skill.

Thanks to this skill, Attila will immune to silence and have 20% more damage to the enemy troop that has less than 50% army strength. Furthermore, this skill will help Attila to easily keep up with the enemy that starts to flee, executing them completely to show his dominance. 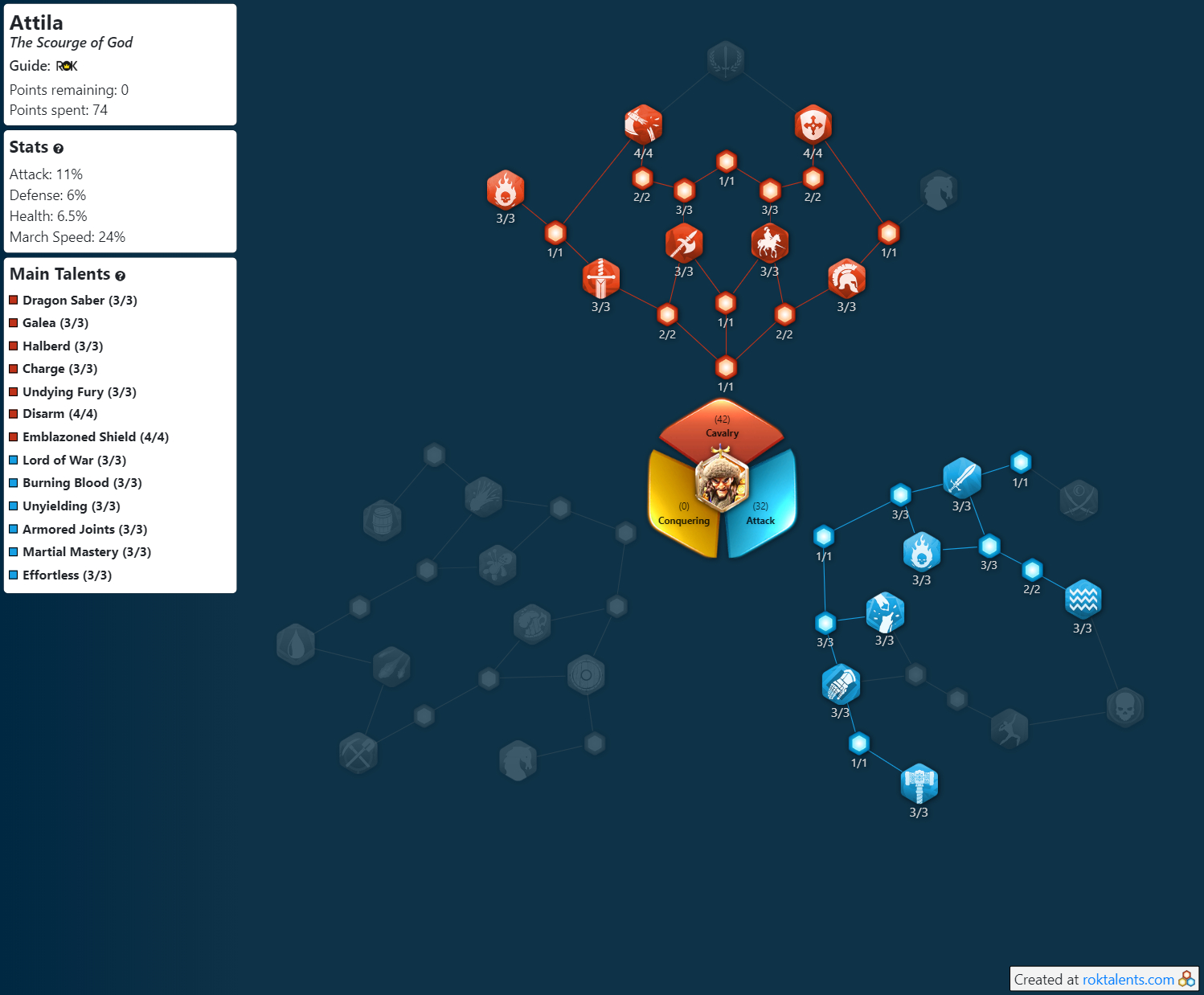 This build is mainly for PvP purpose, so it will focus on increasing the damage, health, and defense of Attila’s troops. It also increases the march speed and overall damage, which is very effective in the battle.

Since Attila has only support type of skills, he should be in the secondary Commander role with a good nuker who has high damage output and can take advantage of Attila’s passive abilities.

As we mentioned earlier, Attila is an excellent Commander and is one of the best supporters in the game. So, we want Attila to serve as a secondary Commander with a nuker that has a high amount of damage to maximize his PvP build and his 5th skill. Here is our recommendation: