In this following guide, we will give you some overview of Alexander the Great skills, talent tree, and strategy in Rise of Kingdoms. Hopefully, this guide will help new players use Alexander the Great properly and maximize his strength in the game.

Alexander the Great is considered one of the strongest legendary Commander in Rise of Kingdoms. Just like Saladin and Genghis Khan, he is only available in the late game, when the kingdom turns to 140 days old. He is a Commander who specialized in the infantry, and he also has high power and large troop capacity.

He is very good at protecting his ally and himself with his unique abilities.

Alexander the Great has a unique set of skills. Not like many other Commanders whose skill is mainly focused on dealing damage or reduce the enemy’s ability in the battle, his skill is all about defense his troops and his ally.

With this fantastic skill, Alexander the Great can protect himself from almost all of the single active skills.

Not to mention his nearby ally also get the protection shield, which will increase their survivability in the battle.

Lead the Charge is an impressive passive skill. Whenever the incoming damage is reduced, that reduction damage will turn into counter damage back to the target. Alexander the Great has a 10% chance to deal 1,700 damage to a single target, which is quite powerful for a passive skill, and the target will also receive a healing debuff by 30%.

Thanks to this passive skill, Alexander the Great can move faster while on the map. His infantry troops will also have 30% more damage to the enemy. It is an excellent passive skill that you definitely want to max it.

His nearby enemies (up to 3 targets) will take 30% more damage whenever Alexander the Great active his 1st skill. It will add a sweet bonus to the already strong offensive combat of his abilities. 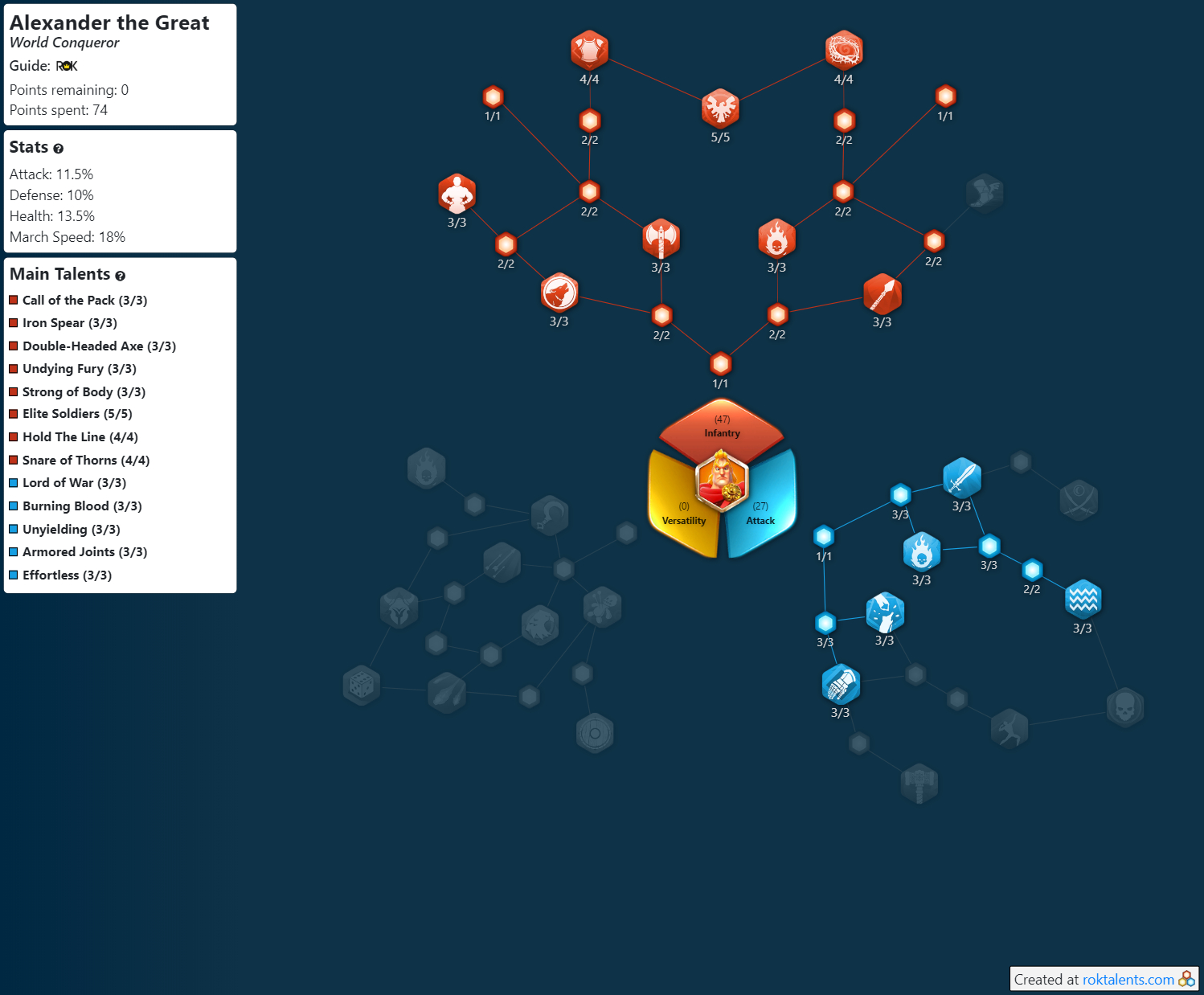 We think it is the best build for Alexander the Great. It will be completely wasted if we let him do other things like hunting barbarians or defending a garrison. With this build, he will definitely become a beast in PvP battles because this build will improve his troop strength, health and defense.

Alexander the Great can be a good primary Commander, but because of his defensive skill set, he should serve as a secondary Commander. Let the primary role to a Commander that has crazy damage output or a debuffer to maximize the troop damage.

Alexander the Great has a lack of skill that can deal direct damage toward his enemy and the ability to clamp down the enemy targets. It is why we highly recommend a strong nuker to pair with him, or you can use a debuffer to punish the enemy’s attack and defense. Here are two recommendations that we think it suits him the best:

He is definitely the best pick for Alexander the Great, and here is why: